OUT AND ABOUT: Mark Grist's Rogue Teacher 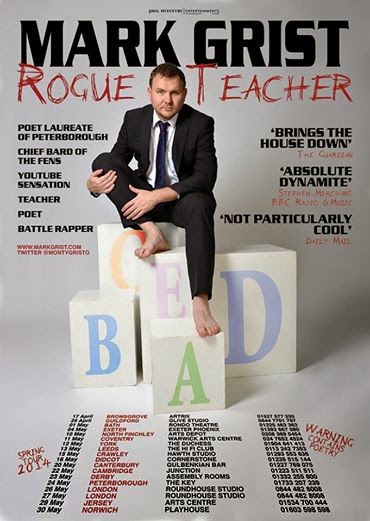 What was it?
A former secondary school English teacher, Mark Grist is now a professional spoken word artist. Performing in all over the country and visiting schools to trying and get kids involved with and engaged in language and poetry. This is the story of how he got from teaching Carol Ann Duffy and Simon Armitage to ‘Date a Girl Who Reads’.

The Show
Mark’s story begins with three boys in his year group that are getting into some serious trouble. They started to spend break and lunchtimes together to try and encourage some better behaviour in the boys. The poetry didn’t go down overly well, but the boys were a fan of lyrics and hip hop and they started to teach Mark about it. It started something. When the boys’ behaviour worsened, a deal was made: if they survived the term under the radar then mark would do whatever they wanted. That resulted in a rap battle.

Just before the interval, we got to hear a few poems from another spoken word artist that Mark has worked closely with over the years: Mixy. I really enjoyed his short set and I’m really interested to have a look and see what happens when they do a set together as they have in the past. Their styles are quite different so I imagine they complement each other brilliantly in that way that clashes often do.

‘I’m Really Good at Board Games’

Throughout the event, Mark talked about his teaching, his love of working with teenagers and how the adults in his life became the problem. I couldn’t stop thinking about how much I would have loved to have a teacher like him. Don’t get me wrong, I’ve had some wonderful teachers, especially English teachers, but Mark sounds like something else. To feel so strongly and so passionately about language isn’t really something I experienced until university. It made me miss education even more than I already do.

Mark gave up teaching to pursue spoken word as a career and during that time completed an MA in Creative Writing. It was during this time that his style of poetry and writing was questioned and after being told that what he was doing wasn’t right, he gave it up to write ‘literary poetry’ if you will. But he hated everything he wrote. I experienced this in one of my creative writing classes where a tutor told me how she felt that YA wasn’t something worth writing; it had no literary merit, skill or value to it whatsoever. I wasn;t a fan of that idea. I wrote what she wanted for a little while and I hated it. I soon decided that I’d had enough of that and went back to writing the YA that I love and I’m actually okay at. I walked out of her class with a first for that module. I’d made a point to overturn every opinion she had about my genre and prove her wrong so I completely knew where Mark was coming from when he turned rap battles into the focus of his MA.

‘Date a Girl Who Reads’

Overall Opinion
As my first spoken word show, I didn’t know what to expect other than readings of performance poetry which I had seen before and loved. Rogue Teacher is funny, touching and so much fun. I really hope I get to see more spoken words events, and hopefully a rap battle or two, in the future.

I was in no way asked, encouraged or paid to review this show.