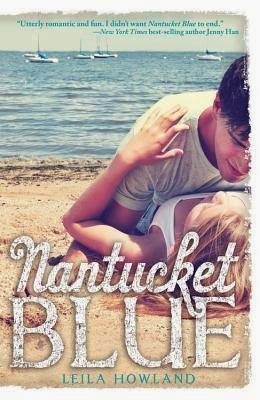 Other Titles in this Series: Nantucket Red (13/5)

For Cricket Thompson, a summer like this one will change everything. A summer spent on Nantucket with her best friend, Jules Clayton, and the indomitable Clayton family. A summer when she’ll make the almost unattainable Jay Logan hers. A summer the surpass all dreams.

Some of this turns out to be true. Some of it doesn’t.

When Jules and her family suffer a devastating tragedy that forces the girls apart, Jules becomes a stranger whom Cricket wonders whether she ever really knew. And instead of lying on the beach working on her caramel-coloured tan, Cricket is making beds and cleaning bathrooms to support herself in paradise for the summer.

But it’s the things Cricket hadn’t counted on – most of all, falling hard for someone who should be completely off-limits – that turn her dreams into an exhilarating, bittersweet reality.

A beautiful future is within her grasp, and Cricket must find the grace to embrace it. If she does, her life could be the perfect shade of Nantucket blue.

I’ve wanted to read Nantucket Blue ever since I first got a glimpse of the cover, but I waited for it to come into paperback with anxious hand-wringing. I feel like I may have amped it up for myself a little too much.

The summary of Howland’s debut promises sun, sand, kissing and coming-of-age, and while Cricket’s story definitely delivers all of that, I still felt it was a little lacking. And a little teeth-gritting in places if I’m honest. For me, there was a serious lack of girl power in Nantucket Blue. I noticed lots of niggling digs at overweight people and judging herself and other girls on their bodies in a straightforward way, no connecting to herself how ridiculous or damaging it is; that is the wrong message to send to teen girls reading this book. I didn’t think Cricket was a particularly strong character either. I know she’s not even eighteen, but she constantly cried and whined and never really stood up for herself. Overall, I wasn’t Cricket’s biggest fan.

There were a few characters I did love, however: Zack and George, Jules’ younger brother and the journalist staying in the B&B Cricket was working in for the summer. It would definitely be easy to fall in love with Zack and I just thought that Cricket being George’s intern while he was writing his book was an interesting aspect to the story and his character was vivid and interesting but not too overpowering. Cricket’s mum also played a surprisingly prominent part in the story through her diary written around the poems in an Emily Dickinson collection. Her diary entries were suitably cringe-worthy and first love, confess-all teen romance and they were brilliant. I wish the cringey aspect had been made more of however, Howland could have got some golden moments out of that. It was used as a plot device rather obviously instead of a teenage girl discovering her mum’s diary and reading about her making out with boys in a summer on Nantucket!

Speaking of Nantucket: someone take me, please? It sounds like heaven. Pristine beaches, beautifully snobby rich boys and boutiques full of clothes I could drool over but wouldn’t let one leg in. I’d love to spend a week there. I actually stopped reading to Google it a few times and I just...seriously, it’s my birthday in six weeks – a trip to Nantucket would be an excellent present...

Nantucket Blue is a light, summery beach read that I don’t think should be expected too much of. There is going to be a sequel published in a few weeks, Nantucket Red, but I really don’t see why it’s needed and I can’t say I’ll be too worried about reading it.