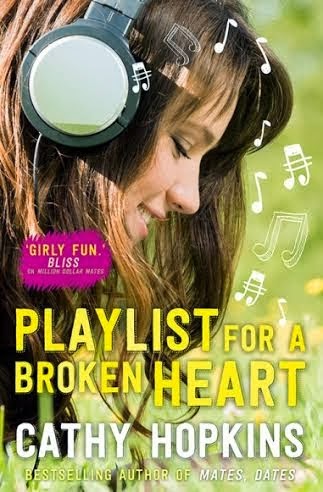 I’m very excited to welcome Cathy Hopkins to the blog today for a atop on her blog tour for Playlist for a Broken Heart. Read on for a brilliant list of music...

What are your top ten songs?

Oo, this is like being on Desert Island Discs. It’s hard to pick just 10 songs as there have been so many from different times of my life. However, ten it is, and here they are. Some are from the 1960s and 1970s. I am still stuck in that era musically but then, there was some great music around then. And I’ve put in a few from the CD compilation that I found in a charity shop in North London and which inspired the book Playlist for a Broken Heart. I’ve put links to the tracks so you can listen to them if you like.

1)    Fallin’ by Alicia Keys. I picked this one because it is the first track on the CD that inspired the book Playlist for a Broken Heart. I found the CD in a charity shop in North London and when I got home, loved so many of the tracks on it and felt that they told the story of unrequited love. I wondered who had made it, was it a gift for someone? And why had it ended up in a charity shop? What was the story behind it? Those questions gave me the idea for the book. Also, the song is fab, great singing by Alicia, great piano and I love the way it builds and the backing singers are something else.

2)    Expecting to Fly by Buffalo Springfield. One of my all-time favourite songs. It gives a sense of being on the edge of something, waiting for it to happen and having to leave something behind. I heard it when I was about eighteen and think it resonated because it summed up so much of how I was feeling back then – going into a new chapter of my life, starting art college and saying goodbye to my teenage years and school and also my family who moved abroad while I chose to stay behind in England. I also picked this song title as the title for book three in my Cinnamon Girl series.

3)    Woodstock by Joni Mitchell. This is from her album Ladies of the Canyon. I remember being in Miss Selfridge in Manchester in 1971 when I first heard this playing and it summed up so much about my generation and the hope that a new more peaceful age was going to happen.

4)    You Do Something to Me by Paul Weller.  Such a romantic song and being a romantic myself, I thought it describes that amazing rush you feel when you meet someone who is going to be special in your life.

5)    To a Flame by Stephen Stills. I like this one because it is so emotive and atmospheric, and great violins!

6)    Time After Time by Cyndi Lauper I picked this one because when I was writing my last book, Love At Second Sight, this song was on a loop tape in  my head because the book is about a girl who is told by a clairvoyant that if she is to find true love, she must find a boy she knew in a past life, someone she’d known time after time. If ever the book is made into a movie, this has to be the sound track.

7)    Weight of My World by Kings of Convenience: This is another song from the CD I found in the charity shop. I’d never heard of this band before I found the CD and liked their sound.

8)    The Worst Thing by Natalie Merchant. I love the Spanish sound of the guitar on this. It’s sung as if it’s by an older lady who has been hurt and is warning about the pain of love. It’s another track from the CD I found in the charity shop. I’d never heard of Natalie Merchant but went out and bought all her CDs soon after. This song is bittersweet and so sad.

9)    Have I Told You Lately by Van Morrison. I had to pick one by Van the man. I like so much of his music but this track is one of my favourites. It’s such a great love song. Great piano and violins in it, they go up and up and just when you think they can’t go any higher, they do. Sends shivers down my spine.

10)  Guinnevere by Crosby, Stills and Nash: I picked this one because whenever I hear it I am back in Manchester in 1972 in a room with a student I had a crush on. He used to play this track for me about a lady with green eyes. I have green eyes and thought it was so romantic. Sadly, he turned out to be a bit of a Casanova type so we didn’t last too long as a couple.

Thank you so much Cathy! I’m definitely going to give these songs a listen!

Playlist for a Broken Heart is no available in paperback. You can read my review here.