BLAST FROM THE PAST: A Room with a View 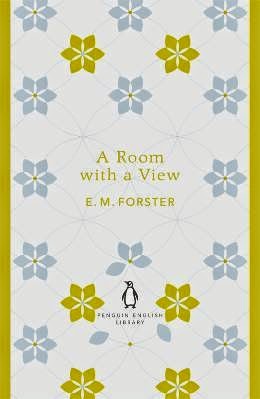 Originally published in 1908 by Edward Arnold

My edition: the gorgeous 2012 Penguin English Library edition (above); I want them ALL.

What’s it about?
A sunny tale of love and liberation, A Room with a View is the story of Lucy, on holiday in Italy with her conservative cousin when she meets George Emerson, an unusual young man not of her class. Although drawn to him, on her return home she becomes engaged instead to Cecil, a comically dull gentleman from her own background.

Sundrenched and optimistic, and including many issues which trouble the Edwardian public – radical thinking, women’s suffrage, the constrictions of English social rules – this is a brilliantly witty love story.

Why now?
I’ve always wanted to read this; it was one my mum loved. It was a rather vague want until I caught sight of this edition during a regular Amazon scour and I fell in love. I had to have it.

I’ve wanted to read EM Forster’s most famous novel for a very long time. I envisioned sun-drenched rolling hills, the cultural delights of Italy being scrutinised by the rigid English and florid declarations of love. And that’s exactly what I got!

Initially, I struggled to get into A Room with a View. I think this may have been partially the fault of my unfamiliarity with the time period – I don’t think I’ve ever read an Edwardian novel before. It wasn’t the strong, lovable, satire of Regency or the stolid, dense prose of Victoriana or the sparseness of Modernism – it was a wonderful blend of all of them, and the cast of characters reflected that amalgamation. Lucy is the young girl finding her voice and fighting against the values of the older generations; Miss Bartlett is the older thorn in Lucy’s side, who maybe understands a little more than first realised; Miss Lavish is the crazy maiden with big ideas and the ultimate freedom and then we have the Emersons. The Emersons are a lower class than the rest of the characters and their outlook on life is startlingly different to every other character in the novel.

One of the things that most set George Emerson and his father apart is their support of feminism. They feel that a woman should be a man’s partner, with their own thoughts, opinions and feelings, and Lucy experiences that when she is with them. They challenge everything she has been taught by her mother and Miss Bartlett about how to conduct herself to ensnare a husband and run a successful home.

George himself is such an unlikely hero. He’s not a hero: he’s shy, has a tendency towards emotional darkness, he panics and he feels. He’s the opposite of the dreadful Cecil. I hated the way that the man that Lucy had agreed to marry was so eager to improve her, to replace her words and ideas with what he thought they should be, to increase her knowledge of history and literature. And yet the story wasn’t a struggle in choosing between George and Cecil; A Room with a View is about Lucy’s struggle to decide who she is and what she be defined by.

I ended up being completely swept along with Lucy’s story and the charming cast of characters. This is the perfect read for a miserable, rainy Sunday when all you want is shorts, sun and an ice cream.

Still not convinced?
- It was listed as one of Modern Library’s 100 Best Novels
- This quote: ‘It isn’t possible to love and part. You will wish that it was. You can transmute love, ignore it, muddle it, but you can never pull it out of you. I know by experience that the poets are right: love is eternal.’
- The feminism! From a book published in 1908! By a man!

Do you think Forster was ahead of his time? Is Cecil a bad person, or just the product of his upbringing and society? Are Lucy and George examples of the ‘new woman’ and the ‘new man’, or are they just anomalies?