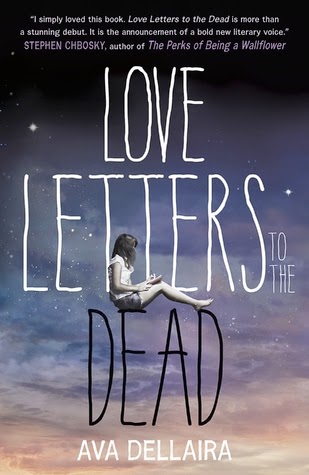 It begins as an assignment for English class: write a letter to a dead person. Laurel chooses Kurt Cobain – he died young, so did Laurel’s sister May – so maybe he’ll understand what Laurel is going through.

But the ghosts of Laurel’s past can’t be contained between the lines of a page forever. She must face up to them – before they consume her.

Ava Dellaira’s debut was one of my most anticipated books of 2014. Now it’ one of my favourite books of 2014 – Love Letters to the Dead is beautiful, poetic, sad and hopeful.

Epistolary novels aren’t something you see that often anymore, especially in YA. It’s such a shame as I think it’s a wonderful form. What begins as an assignment turns into a year-long escape for Laurel as she works through her grief for her sister, her burgeoning love for Sky, her struggles to come to terms with the events that came before May’s death and the separation of her parents. I expected each letter to be to a different person, but Dellaira built up a strong connection between the addressee and Laurel, particularly Kurt Cobain. The contents of each letter reflected who is was written to either in emotion, action or the poems Laurel was studying at the time. I really didn’t expect such a strong connection to form between them but I loved it.

For some of the recipients, Laurel’s attitude towards them was in constant flux, again, especially in the case of Cobain. Most of them were young, brilliant and died tragically and famously, usually by suicide: Cobain, Heath ledger, River Phoenix, Amelia Earheart, Amy Winehouse, Jim Morrison, John Keats, Janis Joplin. Laurel often went from awe and inspiration of their lives and art to anger and incredulousness to understanding and acceptance – the same journey she travelled through with May’s death and the events leading up to it. This was accompanied by a focus on the power of words, lyrics, stories, poetry that reflected on everyone in the novel, both physically and not.

The novel itself is poetically written. Dellaira has a wonderfully lyrical, haunting style that captures your heart and your mind. She weaves language into webs of vivid emotion and imagery in a way that’s heart to pull yourself out of. I absolutely loved the writing in Love Letters to the Dead and I tried to drag it out as long as I could – even skipping a review day to savour it!

Love Letters to the Dead is a stunningly beautiful debut and it’s already clear to me that Ava Dellaira has a bright, bright future in books to look forward to.