All Lined Up, Cora Carmack 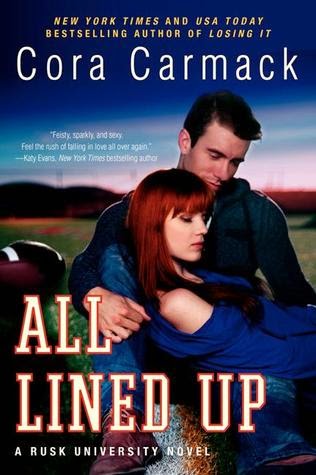 Other Titles by this Author: Losing It, Faking It, Keeping Her, Finding It

In Texas, two things are cherished above all else – football and gossip. My life has always been ruled by both.

Dallas Cole loathes football. That’s what happens when you spend your whole childhood coming in second to a sport. College is her time to step out of the bleachers, and put the playing field (and the players) in her past.

But life doesn’t always go as planned. As if going to the same college as her football star ex wasn’t bad enough, her father, a Texas high school coaching phenom, has decided to make the jump to college ball...as the new head coach at Rusk University. Dallas finds herself in the shadows of her father and football all over again.

Carson McClain is determined to go from second-string quarterback to the starting line-up. He needs the scholarship and the future that football provides. But when a beautiful redhead literally falls into his life, his focus is more than tested. It’s obliterated.

And neither of them know how to walk away from the attraction they feel.

Cora Carmack’s books are my guilty pleasure so as soon as I saw that she had a new one out, I ran to Amazon and snapped it up. I lasted an entire day before I dove in...

Like Carmack’s previous books, All Lined Up is told in fresh, current and on point prose. It just feels so relevant and real, even if the American uni experience is alien (more on that in a minute), and I couldn’t help but fall in love with Dallas and Carson. Told in dual perspective, I got to know them both pretty well. The fact that neither character is censored in their thoughts about the other, there embarrassing reactions to each other, the swearing when it all gets too much: they are eighteen year olds and it comes across that way. Everything about their voices resonates appropriately and false words aren’t thrown into their mouths at all. It feels completely genuine.

I especially found this in Carmack’s approach to female sexuality. It would be expected that Carson would think inappropriately about Dallas in his perspective, but sometimes the girl’s lust and desire is completely ignored, but not in All Lined Up, or any of her books, for that matter. There is no secrecy or shame or ridicule in Dallas’s sexuality which is so, so important in the unfortunate society we live in. I think the topic is covered sensibly and respectfully, but very realistically. (Whoops, quite a few adverbs there...) Carmack’s book pose a really nice rebuttal to the recent article from Caitlin Moran about the need for sex in YA that sent my Twitter feed into a rage.

If it wasn’t for the fact that All Lined Up is written by Cora Carmack I probably would have steered clear; American football is a mystery to me. Because they just call it football, I had a few confused moments. It just doesn’t really exist over here, does it? I have no idea. Me and sports aren’t exactly familiar with each other... I have to admit that even though when the events of the games were being played all I heard was ‘blah blah score blah ouch blah’. I pretty much just skipped over those sections. But American football is like a religion for US universities and it just sounds like such a cool atmosphere. There’s nothing like that in UK unis – nothing that unites the whole school in the same way. Of course we have sports teams, but they just play their games and come back and no one really notices. There really is something very appealing about US unis and I’d love to go, although we’re definitely one up with our student loans and such – I could never afford to go to uni in America.

I thoroughly enjoyed All Lined Up and I can’t wait to get my grubby hands on the next instalment of the Rusk University series.