Out and About: Saucy Jack and the Space Vixens 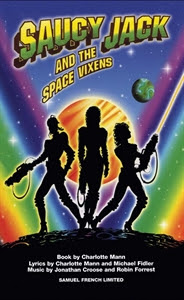 What: Saucy Jack and the Space Vixens

Where: The Lounge, Leicester Square Theatre

What on earth is it about?
At Saucy Jack’s, the stiletto serial killer has struck again. In the midst of aspiring musicians singing their hearts out in an attempt to get noticed and off the planet, the Space Vixens are called in to investigate. They believe in justice, glitter and the power of disco and the killer will not get away with his crimes any longer.

Opening Act: The Martini Encounter – a trio of singers and ukuleles. They were hilarious and really talented; definitely a brilliant warm to warm up the audience for the humour, sass and sexual innuendos of Saucy Jack and the Space Vixens.

The Show
I really didn't know what to expect from Saucy Jack and the Space Vixens. I hadn’t even heard of it until my friend demanded I accompany her to see it in London the follow Friday night. Now I love a good West End show so I was completely up for it. I am so glad I agreed to go as apparently it’s something of a cult classic and now I know why. 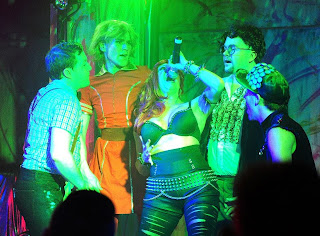 The Lounge is absolutely tiny; nestled in the basement of the Lesicester Square Theatre, there is a small stage, one man bar and around fifty/sixty seats (just a guess at that, but there weren’t too many!). It atmosphere was electric, loud and infectious. Jess and I sat in the second row just to the side as we got there at the very last minute – damn trains! – and the opening act started shortly after we’d settled ourselves with a drink. As I said above, they were fantastic and I was sad to learn that the opening act were being cut as the others that they rotated with weren’t quite making the grade.

The show soon launched into everything camp, glitter and innuendos and the costumes were reflected that perfectly. Full of space-grunge, space opera and copious levels of sparkle, I loved them. Each one captured the characters perfectly. 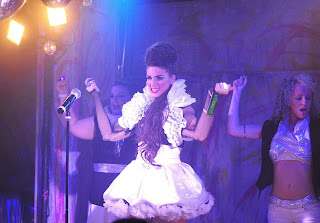 For some reason I wasn’t expecting the voices of the cast to be as spectacular as if they were in a bigger theatre. That was stupid. They all had fantastic voices, but I was particularly blown away by those of Saucy Jack (played by Ralph Bogard) and Jubilee Climax (played by Jamie Birkett). When Saucy Jack came on for his big number, ‘Tortured Plaything’, me and Jess gaped at each other; amazing. Jubilee had lots of shining moments as one of the Space Vixens and she got better and better as the show went on. As well as the fantastic voices, the lyrics were hilarious. Just as full of ridiculous lines, puns, the ever present innuendos and a great addition to the character and story.

As you can tell, I pretty much loved Saucy Jack and the Space Vixens and the actors involved. Then in the interval I loved it even more. Towards the end of the break, the actors came back out onto the stage while the audience milled around, chatted and got some drinks. They carried on in character, quietly in the background, talking amongst themselves about something that had happened at the end of the first act. It was something I’d never seen it before and those people pre-occupied with procuring alcohol had no idea what was going on! Brilliant. 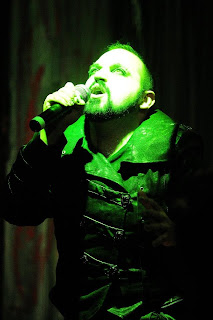 Afterwards
I was really lucky to get to have drinks in the pub with three members of the cast (Saucy Jack, Sammy and Dr Whackoff) and the producer/director, Stuart Saint, as Jess knew Nigel who played Sammy. It was so nice to get a behind the scenes glimpse into the world of West End theatre. The politics, issues and pressure of everything that wouldn’t even cross the mind of an audience member was fascinating. It was a great end to the evening!

It was absolutely fantastic and I’d recommend it to everyone with a sense of humour, a love for disco and in need of an evening full of fun.

The run ends on September 15th so make sure you get your tickets now!

I was not asked by anyone in the show, promoting the show or involved in it in any way to write about it. I just wanted to share something that I loved!