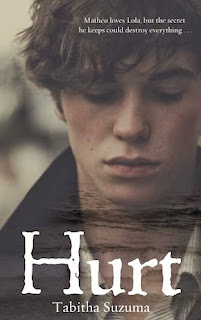 Other Titles by this Author: A Note of Madness, From Where I Stand, A Voice in the Distance, Without Looking Back, Forbidden

He takes a step forward, losing his breath in the ransacked room.
Fear, like a pinball, bounces against his heart, his head, his throat, until finally settling in his gut, hard and cold. His chest churns with unspecified, wretched thoughts. He wants to hurt someone for all the hurt he is feeling right now... What the hell happened?

At seventeen, Matheo Walsh is Britain’s most promising diving champion. He is wealthy, popular – and there’s Lola, the girlfriend of his dreams.

But then there was that weekend. A weekend he cannot bring himself to remember. All he knows is that whatever happened then has changed him forever.

Matheo is faced with the most devastating choice of his life. Keep his secret, and put those closest to him in danger. Or confess, and lose Lola completely...

After having my heart shattered and heart stomped on by Forbidden in 2010, I was simultaneously excited and nervous about reading Hurt.

Once again, I was blown away by the emotion in Tabitha Suzuma’s writing. It’s the vivid and visceral kind of emotion that punches in the stomach and pulls at your heart. I was immediately pulled into Mattie’s world and the pain he felt was heart-breaking. I went through so many different situations that he could have experienced to result in such a thoroughly messed up guy. Suzuma created such an atmosphere and I became enveloped in Mattie’s world.

His slide from normality to obsessive sadness was awful, especially when compared with a few chapters from before that night in Brighton. His times with Lola were full of light, love and vitality and saved him from the coldness of his home life. His house was clinical, his parents absent and every second of his time controlled and scheduled. I realise that he was preparing for the Olympics and that that takes endless training and dedication, but he’s still a teenager who needs a life and the pressure was overwhelming. It made me angry on his behalf. The change to a foggy but fierce existence where everything was tarnished was fascinating.

All of the violent emotions and changes between them as well as a few things Mattie let slip led me to guess what happened in Brighton. I was right which I was a little disappointed about; I wanted to be shocked and horrified. I didn’t guess all of it correctly however, and when that was revealed my hand flew to my mouth and I made kind of a strangled noise in the middle of the food court while eating my lunch... It completely changed the game and the reasons behind the severity of Mattie’s reaction became so, so clear.

Hurt threw up some really interesting questions by tackling such a sensitive and untalked-about issue. Mattie confided in Lola and it took a lot for him to do so and after a particular event, Lola told their two best friends, Hugo and Isabel, as she was worried about them. Was she right? Was she justified in doing so? It was out of love, but she also betrayed his trust. I’m still torn. I also realised that in the two Tabitha Suzuma novels a fair few of her characters seem to get themselves out of dealing with what they’ve done, learned or suffered through. They don’t continue and face the music or the aftermath, and though that broke my heart in Forbidden and I think it made the novel perfect, it grated slightly in Hurt. I don’t know why as I have no idea how I would react in such a situation and I hope I never, ever, ever find out.

Though I didn't enjoy Hurt nearly as much as I did Forbidden and I didn't sob like I was expecting to, it made me think and I love Tabitha Suzuma’s writing.

Thanks to RHCP for sending me a copy for review.