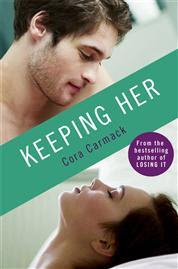 I was surprised by how much I enjoyed Losing It so I was eager to see more of Garrick and Bliss in Keeping Her.

It was so nice to be back with Bliss and Garrick and I loved seeing from both their points of view. For some reason, I was really impressed that the characterisation stayed so consistent that I loved them both through their own eyes as much I did from the other. They’re just such real characters; scared about their future, fiercely in love, nervous about meeting the parents and embarrassment-prone. Bliss’ awe and excitement about going to London was adorable as well. I kind of forget that it’s the UK’s version of going to New York!

Speaking of English-ness... I couldn’t buy into the idea that Garrick was English and that they were in London. It wasn’t something I noticed in Losing It, but Garrick is a really American name. You’d never get an upper class British man named Garrick; it just wouldn’t happen. The same type of man would never wear khaki pants to a party; he’d wear smart jeans or black trousers. We just don’t tend to have khaki pants, do we? And Bliss went to a pharmacy and bought a bottle of ibuprofen and we have chemist with packets of ibuprofen. The accumulation of all these facts got on my nerves a little. I felt as if Cora Carmack had never been to England or even done very much research about it.

Aside from some English niggles, I really enjoyed Keeping Her. Cora Carmack’s books are quick, fun and easy to read and I’m looking forward to reading more of her stuff.