Out and About: Harry Potter Studio Tour 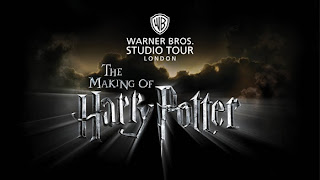 What is it?
I highly doubt this needs any introduction at all in the blogosphere, but the Harry Potter Studio Tour is exactly what it sounds like! You can visit all of the sets, props and costumes used over the course of the eight Harry Potter films, including Diagon Alley, The Great Hall, the Knight Bus, the Triwizard Cup and the Harry’s first year robes.

How much did I love it? (Hint: A LOT)
As me and Sara (my old uni housemate and resident bestie) can’t drive, she came to mine on the Saturday and we public transport-ed it to the Studios on the Sunday. It was quite a mission really. You have to get to Watford Junction train station (we have to go to Victoria first, then Euston, the Watford Junction) and a shuttle bus runs from the station to the Studio for a £2 return every 15-30 minutes. It’s a really, really good idea and we would have been stuck otherwise! 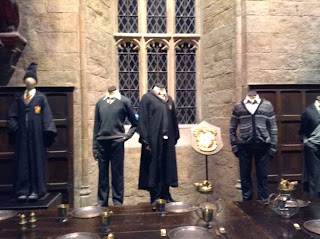 It was rather busy when we went - as I assume it is most days! – so we had to queue to go into the exhibition. In the queue we got to see Harry’s cupboard under the stairs. You then go into a small room where you’re introduced the Harry potter phenomenon and then move onto a cinema where Daniel Radcliffe, Emma Watson and Rupert Grint introduce the tour. After that, the tour starts in earnest. That moment leads ou into the Great Hall and a gasp of wonder hit everyone. It was magical. From the Great Hall you go into a large exhibition hall filled with everything you can imagine would be there and more.

Along the way you can watch short films from the cast and crew who explain bits of movie magic and facts of interest. There a small murmur of awe from everyone constantly, with sighs of happiness and excited expulsions thrown in for good measure. I mean, you can go into Dumbledore’s office... 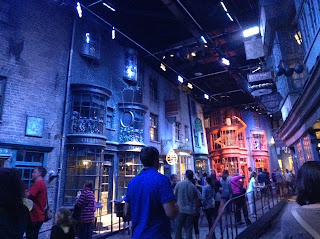 About two-thirds through the tour you come outside where there is a refreshment cabin and a Butterbeer one with picnic tables and some of the outside sets to explore. I tasted frozen Butterbeer in Harry potter World at Universal and I loved it, but I didn’t enjoy it this time. I’m not sure why! It is quite expensive, so be prepared to pay £2.95 for at least, increasing to around £5 for a souvenir tumbler and £6.95 for a tankard.

The entire visit was surreal. I couldn’t believe that it was real, especially when it came to the Great Hall and Diagon Alley. It’s mindblowing. The care, detail and passion of everyone involved was astounding and I couldn’t believe all of the little extras that were made and used for things that weren’t even seen in the film purely for authenticity. No wonder they’re so involving and magical! It was worth every penny of the ticket price and I’d go again tomorrow. 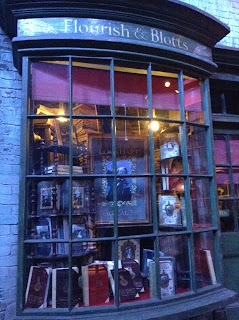 Tips for your visit:

- Book a time slot as early as you can. Mine was 4:30-5pm and we stayed for a good four hours; it was a late one.
- Set yourself a budget for the gift shop. You will want everything and it’s ridiculously expensive.
- Take a camera. Seriously.

I highly recommend going to visit the Studios, especially if you’ve grown up with the books and films of have kids who are still in the heart of the magic. Also, the surprise at the end? Worth the £29 alone.