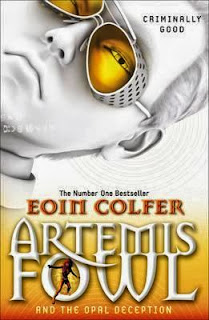 Other Titles in this Series: Artemis Fowl, The Arctic Incident, The Eternity Code, The Lost Colony, The Time Paradox, The Atlantis Complex, The Last Guardian

Arch criminal Artemis Fowl’s mind has been wiped. Now someone wants him dead.

Artemis Fowl is the only boy ever to have discovered an armed and dangerous fairy race living below ground. He just can’t remember any of it.

But Artemis needs his memory back – and fast – because a power-crazed pixie is out for revenge, secretly scheming to overthrow the Lower Elements Police. If only Artemis’s one fairy ally, Captain Holly Short, wasn’t on the run. Everyone is depending on him.

And with Holly gone, Artemis is depending on a flatulent dwarf. Things are about to explode.

I was so pleased to be back in the magical world of Captain Holly Short, Artemis and Butler in Artemis Fowl and the Opal Deception. This series is just so much fun.

Even having his memory wiped by advanced fairy technology doesn’t stop Artemis from being dragged into helping clear Holly’s name and save the fairy world again. I really loved that even though Artemis couldn’t remember the things that had happened to him and the friends he had made over the past two years, he still felt the stirrings of change. He had a partial conscience and felt guilt. It was especially brilliant as he was so confused by his own feelings!

With each novel we get to learn more and more about Haven and all of the many, many ways that put us to shame. We really are Mud Men in comparison to fairies! The idea that they’re making fun of the things that are a proud point of our culture and history, such as the Seven Wonders of the World, made me chuckle. They had to go and one up and change it to eleven and make a theme park of them!

Having Opal Koboi back on top form and wreaking havoc of the evil genius variety. She’s such a fabulous villain and I love to hate her. The fact that Artemis, Holly, Butler and Mulch couldn’t defeat her without some casualties made Opal all the more terrifying as a children’s villain.