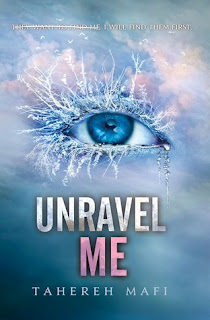 Other Titles in this Series: Shatter Me

Our lips touch and I know I’m going to split at the seams. He kisses me softly and then strongly like he’s lost me and he’s found me and I’m slipping away and he’s never going to let me go.

Juliette has escaped from The Reestablishment. Now she’s free from their plan to use her as a weapon, and free to love Adam. But Juliette will never be free from her lethal touch. Or from Warner, who wants Juliette more than she ever thought possible. Haunted by her past and terrified of her future, Juliette knows that she will have to make some life-changing choices. Choices that may involve choosing between her heart – and Adam’s life.

Oh my giddy aunt, Unravel Me is full of non-stop action, raging emotions and quite a few shocks. Loved it.

This intensity continued into the relationship between Juliette and Adam (and Juliette and Warner, but we’ll talk more about that later...) At certain points I though the pages were going to catch fire! Their interactions are sensual and passionate and every feeling that accompanied their actions came across loud and clear, more so a lot of the time.

So, Warner. In my review for Shatter Me I was so confused as to how anyone could champion Warner over Adam: he was a bullying, vile, murdered and I just didn’t get it. Why would you want someone as fragile and damaged as Juliette with Warner?! I officially eat my hat. Warner came into his own in Unravel Me and I kind of fell in love with him a little bit. The reasons behind why his is the way he is became clear and how he was transformed by loving Juliette opened my eyes to him a little bit. I think my favourite element of his transformation was that he never once apologised for how he is and his belief that he won’t change, even though he had already begun to. Now I don’t know who I want to end up with Juliette...

I thoroughly loved Unravel Me and it’s going to be a very painful wait for book three and the culmination of Juliette’s newfound determination to fight.