The Taming of the Tights - Louise Rennison 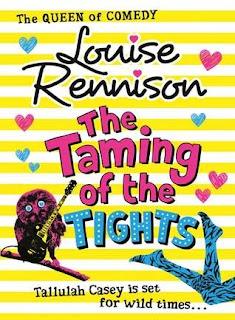 Other Titles in this Series: Withering Tights, A Midsummer Tights' Dream

Gadzooks!  It’s another term at Dother Hall for Tallulah Casey and her mates. But can they keep their minds on the arts with all those boys around...

After the thing-that-will-never-be-mentioned last term, Tallulah is keen to put all thoughts of Cain behind her. But that seems like the last thing he wants.

Their performing arts college may have been saved by Honey’s mystery benefactor, but for how long is anyone’s guess. So will Tallulah finally get to wear those golden slippers of applause or will Dr Lightlowler swoop down on her glory days?

And with Seth and Flossie forever snogging, Vaisey and Jack loved-up and Phil and JO fondly biffing each other can Tallulah resist the call of her wild boy?

Don your craziest tights and Irish dance your way to some surprising and hilariously unexpected answers...

I’ve been enjoying the Misadventures of Tallulah Casey series, but it wasn’t really until The Taming of the Tights that I really fell in love with it.

Tallulah really came into her own in the third instalment of the series. She was at her funniest, and nuttiest yet, and some of the things that came out of her mouth had me laughing aloud, especially when she was talking to Charlie. I really like Charlie, but he’s a bit of a watered-down Robbie for me and I have to say that I’m behind bad boy Cain. He challenges Lullah and really adds another dimension to the novel which brought it up out of ‘the Georgia Nicolson spin off’ series (which it isn’t, but that’s how it had felt for me until now) and into something whole and different. I’m looking forward to getting to know more about him because we’ve definitely not seen the last of him.

There was so much more personality and lovable-ness in The Taming of the Tights. The terrible, terrible raps that Lullah makes up about anything and everything were brilliant and hilarious and the way she interpreted some of her class- and homework were so off the wall I was in stitches even imagining it. Then came Lullah Lulu-luuuve List, based off of Cousin Georgia’s Snogging Scale, and I fell completely in love with her.

I occasionally started to worry that I’m getting too old for this series. She’s very young, only fifteen, and I didn't always connect with her, but she grew up in some ways in The Taming of the Tights and I feel that I’m mostly back on track with it. I do know that people in their teens reading this series at it comes must be lapping it up and falling for it the same way I did with Georgia as I grew up with that series and it’s almost a soundtrack to those years for me: Lullah will be our little sisters’ Georgia.

I thoroughly enjoyed the ridiculous Yorkshire accent (sorry, it’s hilarious in writing) and Lullah’s discoveries of boy-kind and I’m already eagerly awaiting the next instalment.

Thanks to Harper Collins for sending me a copy to review.