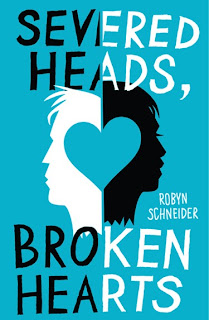 My own tragedy held out. It waited to strike until I was so used to my good-enough life in an unexceptional suburb that I’ve stopped waiting for anything interesting to happen. Which is why, when my personal tragedy finally found me, it was nearly too late. I had just turned seventeen, was embarrassingly popular, earned good grades, and was threatening to become eternally unextraordinary.

With the press release declaring comparisons to John Green and Sarah Dessen, there was no way I wasn’t going to fall in love with Robyn Schneider’s debut. I was smitten by the end of the Author’s Note.

Ezra’s narration is clever, witty and intelligent, but it has a lot of heart too. His voice is clear and captivating and although I’m a girl with no experience of being inside a boy’s head, I think Schneider nailed being a seventeen year old boy. His preconceptions about the people outside of his former jock friendship group, his pre-occupation with tennis and the honesty about sexuality and his thoughts about girls, it felt realistic and refreshing. One of my favourite things about the way Ezra told his story was the hints and foreshadowing, though. It gave great parallels to The Great Gatsby which he was a little obsessed with. He saw a lot of himself in Gatsby and that was woven into the novel really beautifully and cleverly. There was a sense of fate colliding with choices and it was rather thought-provoking.

Though Severed Heads, Broken Hearts will inevitably be compared to John Green and Looking for Alaska, there are a few things that does set it above Green’s first novel. at first I thought Cassidy was going to turn out to be a Manic Pixie Dream Girl, and in some ways she was, but I never disliked her in the way I usually do when faced with that stereotype. I felt for her and wanted to get to know her and what her secrets were. I saw her through Ezra’s eyes and through my own at the same time, realising she was a genuinely damaged girl who had feelings for Ezra whilst battling her demons.

Taking all of that into account, you wouldn’t expect Ezra and Cassidy’s relationship to be soft and quiet, but still strong, and yet it was. They just worked together. Cassidy enabled Ezra to accept who he really was, and have someone to blame for that! Ezra helped Cassidy to ignore the things that plagued her and attempt to move on. I think that they’re a great pairing and a perfect teenage couple. The resolution of their relationship was unusual and a breath of fresh air. It was authentic.

I loved Severed Heads, Broken Hearts and I find myself thinking about it at the most random of moments. I’m already excited for Robyn Schneider’s second novel.