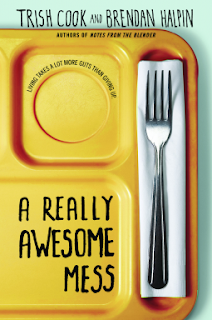 Other Titles by these Authors: Notes from the Blender

A hint of Recovery Road, a sample of Nick & Norah’s Infinite Playlist, and a cut of Juno. A Really Awesome Mess is a laugh-out-loud, gut-wrenching/heart-warming story of two teenagers struggling to find love and themselves.

Justin was just having fun, but when his dad walked in on him with a girl in a very compromising position, Justin’s summer took a quick turn for the worse. His parents’ divorce put Justin on rocky mental ground, and after a handful of Tylenol lands him in the hospital, he has really hit rock bottom.

Emmy never felt like part of her family. She was adopted from China. Her parents and sister tower over her and look like they came out of a Ralph Lauren catalog –and Emmy definitely doesn’t. After a scandalous photo of Emmy leads to vicious rumours around school, she threatens the boy who started it all on Facebook.

Justin and Emmy arrive at Heartland Academy, a reform school that will force them to deal with their issues, damaged souls with little patience for authority. But along the way they will find a ragtag group of teens who are just as broken, stubborn, and full of sarcasm as themselves. In the end, they may even call each other friends. A funny, sad, and remarkable story. A Really Awesome Mess is a journey of friendship and self-discovery that teen readers will surely sign up for.

I nabbed a copy of A Really Awesome Mess off of NetGalley on a whim as it was an auto-approval. I only started it because I wanted to read a July review book on my Kindle. I surprisingly loved it.

Halpin and Cook dreamed up a unique and intriguing premise that the rest of the novel lived up to perfectly. It was honest, raw and real. So many issues were discussed and confronted: anorexia, elective mutism, depression, abuse and quite a few more. Even though all of those things were parts of the characters in A Really Awesome Mess and it was set in a place obsessed with therapy and strange cures, it never came across as preachy.

I fell in love with this ragtag bunch of damaged kids quickly and more readily that I was prepared for. The split narrative between Justin and Emmy went down a treat, especially as the beginning when they were giving off mixed signals to each other! As individuals they were really interesting.

Emmy is such a different heroine. She’s a Chinese girl who was abandoned as a baby by her parents and adopted by a white American family. She’d always felt out of place and different and then some anorexia was thrown in. Before I knew that it was an illness, I was really glad to learn that Emmy was a former fat girl. As the novel progressed I soon began to wonder if she was ever fat at all...

Then Justin sauntered into her life. Depressed, feeling unwanted and in need of a serious hug. I love how they helped each other on their way to happiness. They helped each other be better and healthier and they felt comfortable with each other – something both of them needed and hadn’t found with many other people.

A Really Awesome Mess was surprisingly heart-warming and emotional and I thoroughly enjoyed it. I’ll definitely be looking out for more books by Halpin and Cook – they make a brilliant team.

Thanks to NetGalley and EgmontUSA for the review copy.