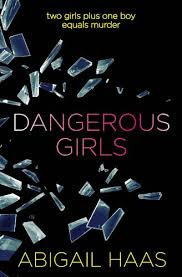 It’s supposed to be the best time of Anna’s life. Perfect.
But then Anna’s best friend is found brutally murdered.

And as the local police investigate the gruesome crime, suspicion and evidence unfathomably point to one person – Anna.

Now trapped in a country not her own, Anna must fight for her freedom and prove her innocence. But as she awaits the judge’s decision, it becomes clear to Anna that everyone around her thinks she is not only guilty, but dangerous.

And when the truth finally comes out, it’s more shocking than anyone could imagine...

I don’t really know how to talk about this book; it's that good. I mean, why on earth are you reading my review when you could be reading Dangerous Girls?!

Abigail Haas launches us straight into the novel with a phone recording of the 911 call when Anna and her friends found Elise, stabbed to death on her bedroom floor. What a way to start! I’m very pleased to say that transcripts of news shows, phone calls, texts and courtroom arguments continued throughout the novel – I love it when the author gives you little extras like. It gave the story a sense of a wideness outside of Anna’s perspective and side of the story. Haas continued the jaunty narrative style by flicking back and forth between the trial, the past, the present and their holiday with chapters and I loved the suspense and tension it brought me. It’s such a good job I don't bite my nails as I wouldn’t have any left!

The full-throttle pace kept me rapt. I read it in two addictive gulps, picking it back up as soon as I was awake the morning after I started it until I was finished. The prose is seductive, sexy and dangerous and I still can’t stop thinking about it – it’s by far one of my favourites of the year so far. I was on the edge of my seat, I didn’t know who to trust and my suspicions were flying all over the place. I just couldn’t decide who I thought murdered Elise, I think I accused everyone in the novel at some point... But when it came to the big reveal, boy was I not expecting that!! Talk about plot twist! Just brilliant.

As the novel went on, I couldn’t see how Anna could possibly get out of the damning allegations against her, especially with the infuriating and probably corrupt Dekker leading the charges against her. That man drove me mad. I wanted to scream at him and hug Anna and punch him in the face for good measure! I was so angry for her. The way that she was constantly betrayed and shot down for every argument presented in her favour. I was virtually tearing my hair out at some points! Dangerous Girls is an emotional rollercoaster that culminates in the biggest ‘Holy crap!’ I’ve experienced while reading in a seriously long time.

Thanks to S&S for providing me with a review copy!