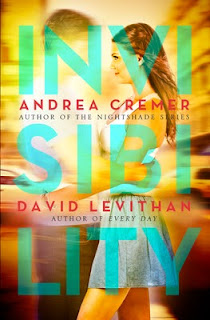 Stephen is used to invisibility. He was born that way. Invisible. Cursed.

Elizabeth sometimes wishes for invisibility. When you’re invisible, no one can hurt you.

Then Stephen and Elizabeth meet. To Stephen’s amazement, she can see him. And to Elizabeth’s amazement, she wants him to be able to see her – all of her. But as the two become closer, an invisible world gets in their way – a world of grudges and misfortunes, spells and curses. Elizabeth and Stephen must decide how deep into this world they’re going to go – because the answer could mean the difference between love and death.

Even though I wasn’t a massive fan of Andrea Cremer’s Nightshade trilogy and I’ve only read two of David Levithan’s co-authored books, I had seriously high expectations for Invisibility. Thankfully, they were met.

It’s such a unique concept. I’d never heard of anything like this before so I was really quite excited to see what direction Levithan and Cremer would take it in; there were so many possibilities. I loved that they chose curses and spellcasters. It’s a slightly different take on magic that you don’t see in YA in novels outside of high/epic fantasy and I loved it. The world Levithan and Cremer created had me on the edge of my seat with the mystery and the danger whilst I also wanted to learn more and more about it. I think that Elizabeth and Laurie’s reaction to the world they were thrown into were refreshingly realistic as well: shock, fear, disbelief and tentative to get involved at first.

Elizabeth and Stephen’s relationship took a knock once Stephen’s secret was out and it made my heart hurt. I really felt the connection between them and with the dual narrative I could see how much they needed each other while they were pulling away, either for Elizabeth to get her head together or Stephen for Elizabeth’s safety. This couldn’t have been achieved without the stunning prose from both authors.

Levithan and Cremer are very different, but it completely worked. I was continually blown away by David Levithan’s writing; it’s wonderful, melancholy, witty, intelligent and full of emotion. I feel the need to go out and buy every single book he’s ever published now... there’s an elevation to it that suits the softer, more angsty mind of a teenage girl that Andrea Cremer wrote for Elizabeth. Her intelligence, strength and power came through just as strongly as it did for Stephen, but slightly differently and I think that’s what made it for: the way they perfectly complimented each other.

Laurie, Elizabeth’s brother, provided some much needed comic relief and another dimension to the tale with the event that pushed Elizabeth and her family to move to New York surrounding him. It was briefly touched on, but it wasn’t the centre of his story which I loved. I think it was a lot more powerful that way. His relationship with Elizabeth was also lovely: caring, loyal and they were genuine friends. I really enjoy coming across sibling relationships that are strong and positive as I think that they should be and that they eventually will be that way in most cases.

I thoroughly enjoyed this and I love it even more knowing that it’s a standalone! I do hope that Andrea Cremer and David Levithan join forces again though: Invisibility was unique, emotional and very, very clever.

Thanks to Puffin for the review copy!