The lovely Natasha Farrant, author of The Things We Did for Love and the newly published After Iris: The Diaries of Bluebell Gadsby, has stopped by as part of her blog tour to tell us who she’d cast in the film version of After Iris.

Who would play whom in the film of After Iris?

This is a fun thing to do! Loads of people have said they think After Iris would make a brilliant film (though sadly, to date, none of them have been people who actually make films!).  But you can always dream, right?  In my film version of After Iris, this is who I would like to play my characters:

I know he’s way too old, but this is fantasy, so for Zoran I would like a young  John Depp. 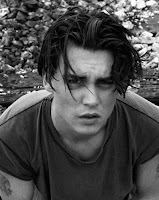 If he’s too busy :), I’d like Aaron Tveit, because ever since Les Misérables we have all been in love with him in our house and though usually he’s a bit too clean cut for Zoran, here he is looking suitably geeky with glasses.  Give him a goatee beard, and we’re all set…

Is the most difficult to cast, because there isn’t such an enormous choice of child actresses out there, and she is the lead, after all…  In fact my daughter Justine (who is on the front cover of the book) has told me that part is hers and hers alone, so I guess that’s settled! Here she is, being Blue:

The role of stroppy big sister Flora is for our neighbour, Bel Powley.  Younger viewers will know Bel from her role in TV drama MI High.  She’s had a number of TV roles, and has starred in plays on Broadway and in the West End.  I’ve a feeling we’re going to hear a lot more about the girl who used to come and babysit for us in her onesie!  At twenty-one, she’s a touch too old, but I’ve seen her play the rebellious teenager before and she is BRILLIANT!

Here is Bel with Tamsin Greig in the play Jumpy, last year.  And come to think of it, I think Greig would be perfect as the children’s mother – she does harassed so very well.  For their father, I’d like Mr Weasley, otherwise known as Mark Williams, because just looking at him makes me laugh but there is something sad and wise about him too. 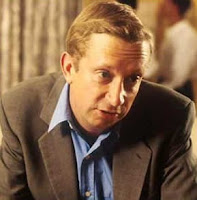 Back to Les Misérables to cast Jas, the naughty little sister, and I must say the Isabelle Allen look as Cosette, all tangled long hair and torn dress and grubby angelic face is just about perfect.

And lively, mischievous little brother Twig is a dead ringer for Gavroche!

Finally, to bad boy love interest JOSS.  Here I would like Reid Ewing, who plays Dylan, my favourite character in hit US sit-com Modern Family.  Come on – you’d fall for him, wouldn’t you?

So all we need now is a script, a director, a studio and a few million dollars, and we’re all set! I’d go and see this movie! Wouldn’t you??

Thanks Natasha! Reid Ewing is totally adorable! Looks like I may have to start watching Modern Family...