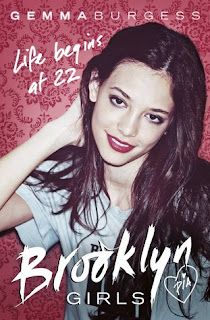 Other Titles by this Author: The Dating Detox, A Girl Like You

JOBLESS.
CLUELESS.
TOPLESS ON FACEBOOK.
*Not necessarily in that order*
WELCOME TO NEW YORK CITY.

Pia Keller is not living the dream. Unemployed, unemployable and broke, post-Uni life in a Brooklyn townhouse with her four best friends suddenly isn’t so easy.

Who knew adulthood would be so damn grown-up?

I went into Brooklyn Girls with pretty high expectations, but also trepidation due to the genre. Sadly, I was fairly disappointed.

Firstly though, the positives. I loved that Gemma Burgess focused her characters’ attention on finding themselves in limbo after completing university. All the girls were thrown into (semi) real life and didn’t like where they found themselves and discovered that it was hard and depressing. I know your feels, girls. This is what I’ve been waiting for with New Adult so I’m glad it was finally delivered. Though there were romantic entanglements, there were more of an accompaniment than the focus of the novel which was refreshing.

I have to admit that I didn’t like Pia or any of the other girls bar one whose name I’ve forgotten. She was the little sister of the girl who owned the house. They were all spoilt little rich girls who spent most of the time before the novel partying, drinking, spending all of their parents’ money and getting away with murder. They were also made out to be brilliant people which irritated me.

This became even more annoying as Pia made seriously dangerous and stupid mistakes. It was made out to be a dire situation, yet you know that whatever trouble she incurred, her parents would have bought her out of it. It took away the realism of her struggles with finding her place in the world. So did the fact that she sorted her life out and was rolling in within six weeks. If that’s the real world, it looks like I’ll be part of a massive company, have a business and be rich in about three weeks. Perfect.

Though I enjoyed the idea and some of the themes of Brooklyn Girls, I was a little disappointed and I don’t think I’ll be reading anymore of the series.

Thanks to Quercus for providing me with a review copy.