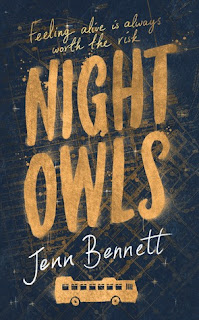 A love sprayed in gold…

On midnight rides and city roof tops, Beatrix begins to see who this enigmatic boy really is. But Jack is hiding much more – can she uncover the truth that leaves him so wounded?

A unique and profoundly moving novel, Night Owls will linger in your memory long after the final page.

I had high hopes for Jenn Bennett’s YA debut and they were blown out of the water. I completely and utterly loved it. LOVED IT.

I don’t really know where to start with this review. I kind of just want to waggle the book in your faces until you agree to read it, but that’s probably not the best idea… I could start by praising the maturity around sex, while still keeping it sexy. I was really, really impressed with how Jenn Bennett handled this. Jack and Bex talked about sex way before they did it, it was ensured that the reader knew it was safe sex, and Jack even asked what would work for Bex! I don’t think I've ever seen that in a YA novel and I nearly cheered. Some people might assume all this lessened the momentous moment, but it didn’t. It was sweet, awkward, funny and perfect for both the reader and Jack and Bex. Bravo Jenn Bennett.

I celebrate the way Night Owls tackles mental illness and the stigma surrounding it, especially for those in the spotlight; the raw emotions when your parents’ divorce; the stress of trying to do everything you need to do to make your dreams come true; the money struggles of a single parent. Lots of issues cropped up in Bex and Jack’s story, but none of them were forced upon the reader and there was no preaching or superiority – they were all just parts of life.

Then there’s the parents themselves, they definitely deserve discussion. Form the off, Bex’s mum was vividly present and invested in Bex’s life. But she also has a wicked sense of humour, genuinely seems to like her children and they like her back and she’s completely human. Nurse Katherine the Great as Bex introduces her to Jack, makes some mistakes that were selfish and detrimental to her children, but I don’t think there’s a single parent out there that hast done that too, consciously or not. Even Jack’s parents who we saw a lot less of were well-rounded and, again, humanly flawed. This was especially true with Jack’s dad and there was a particularly emotional moment with him towards the end of the novel that had me rather choked up.

And finally, one of the most important elements of the novel, is the presence of art in Night Owls. Bex is a scientific artist. She loves to draw skeletons and dissections and copy biological images she finds in textbooks. It’s what she wants to do as a career and it was fascinating. I’ve always had an interest in art and in science, but I’d never think to combine them! I would love to have seen the piece she submits for the competition; it sounds extraordinary. Jack’s art is very different to Bex’s, and illegal: graffiti. The single words sprayed in giant, beautiful typography in spots all over San Francisco are just as much art as Bex’s. With added danger and the risk of a criminal record, of course.

Night Owls is an ode to art, artists, love and family and I devoured it. One of my favourites of 2015.