Graphic Novel Round-Up (3): The Wicked + the Divine 2: Fandemonium, Low 1: The Delirium of Hope and Sex Criminals 1: One Weird Trick 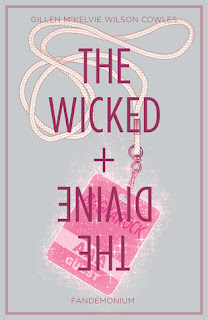 Synopsis
Following the tragic death of Lucifer, it takes a revelation from Inanna to draw Laura back into the world of Gods and Superstardom to try and discover the truth behind a conspiracy to subvert divinity.

*Spoilers for Volume 1 ahead!*

I fell in love with the first instalment of this series earlier in the month and I was counting down the days until this popped through my letterbox. Fandemonium was just as incredible as The Faust Act.

In the wake of Luci’s sudden, violent death, Laura is struggling. She can’t stop going over the events of that night and she’s desperate to uncover the mystery of the murderer that Luci was accused of being. During this period of time, all of the art is darker, almost swimming in an echoey blue light that just put across Laura’s state of mind immediately. It also felt a lot text heavier than the previous volume.

With the help of Cassandra and Innana, Laura delves even further into the dangerous, heightened world of the gods and ends up getting way more than she bargained for. All of the biggies from the first volume are back and we get to learn more about them, but I still want to know more – they’re fascinating! It’s really hard to discuss the plot without spoilers as so much happens so I’ll move onto the art!

There are three artists that work on this comic together - Jamie McKelvie, Matthew Wilson and Clayton Cowles – and they’ve truly created something wonderful. It’s my favourite art that I’ve come across so far. I love how each character has their own typography, how the comic isn’t the same traditional format all the way through, the colours. Oh man, the colours. I only wish our world looked like that.

After a truly evil cliffhanger, I’m once again eagerly awaiting Volume 3. I hope they at least announce a release date soon! 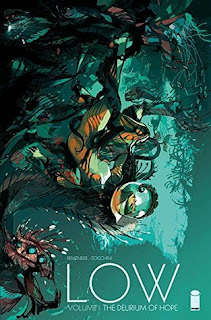 Synopsis
In the far distant future, the sun’s premature expansion has irradiated Earth sending humanity to the lowest depths of the seas, hidden within radiation-shielded cities, while probes scour the universe for inhabitable worlds. After tens of thousands of years, a single probe returns, crashing on Earth’s surface, a now-alien place no human has seen for millennia. Now Stel Caine and her husband Joel, the last Helmsmen of the once-great city of Salus, must rise from the depths of mankind’s despair, and journey to the surface in search of salvation.

The Delirium of Hope is a really interesting first instalment in the Low series, but I did have a rather large problem.

I really loved Greg Tocchini’s dreamy art style. The colours are lush and the visible brushstrokes really portrayed a blurred but vibrant underwater world. After tens of thousands of years, the sun’s radiation has pushed cities under the ocean, deep into Marianas Trench for safety. Now they’re close to the end – it’s about a year until the strength of the sun reaches the inky depths of the ocean and destroys the few remaining underwater cities. But Stel Caine has received knowledge that a probe has reached somewhere where life may be sustainable, but getting there could mean death.

Stel is eternally optimistic. Through the kidnapping of her children, the death of her husband, her capture by the degenerates of the third city – she took it in her stride. She’s strong, she’s intelligent, and she’s persistent, determined and always hopeful. This amazing female figure spent nearly the entire story in a skintight suit, naked or wearing three small scraps of material covering specific areas. Why?! I understand the suit as she was going out into the ocean and into a pod to travel, but why she was naked for ages at the beginning and then wearing virtually nothing during her capture. It made no sense, it had no relevance or bearing on the story whatsoever and then I realised that it’s not uncommon in graphic novels. It's a genre largely dominated for men, and though there are plenty of positive messages and portrayals, the objectification is still there in the art and I hadn’t noticed just how much until reading this.

I am really curious about this world and the characters though so I think I’ll continue on. It may just whip me up into a rage, however… 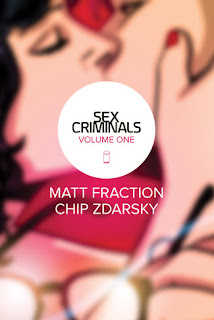 Synopsis
Suzie has a secret
For her, sex literally makes the world come to a standstill.

Jon has a problem
He hates his life, his job, and the special curse that makes him just like Suzie.

Girl meets boy
Girl hooks up with boy
And for the first time in their lives they find themselves alone, together.

So they do what any new young couple having sex and freezing time might do:
They rob banks.

I had super high expectations for the first instalment of Sex Criminals – it seems to be universally beloved at the moment – but although I enjoyed it, I didn’t fall head over heels with it like I was expecting to.

As you can probably predict, One Weird Trick is pretty strange, but it was strange in a way that I found it a little difficult to follow the plot.  It jumped back and forward with little indication and I was pretty disappointed with the lack of actual crime Jon and Suzie committed – I thought that was the main plot point? I liked the backstory on their particular…talent, but it also seemed to give a really good way to have a relationship of novelty and what they could do with it rather than a genuine connection between them. I only time I felt a spark between them was when they first met and they had a wonderful moment over shared love of Lolita.

However, Sex Criminals is incredibly sex, desire and sexuality positive, particularly in reference to women which alone is worth celebrating. It also commented on rape culture in an important way that I hope will reach audiences that the discussion of these topics that is currently being had in YA won’t. The art is also properly beautiful, especially when Jon and Suzie have stopped time and are in The Quiet. It’s all wispy, swoopy, dreamy colours and it’s lovely.

Though I wasn’t a huge fan of One Weird Trick, I’ve heard that the second volume is much better so I’ll give that a go before I make any decisions about this series.