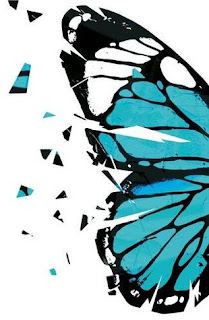 Carla has just moved to London and starts at yet another school; she is desperate to fit in. though she makes a couple of friends, she soon meets the charismatic, good-looking Finn and their whirlwind romance begins. Carla, an A student and gifted artist, lets her schoolwork slip as she enters Finn’s world – a world of partying and drugs. Friends tell her that Finn is no good – even his brother, Isaac. Bu Isaac has an ulterior motive, doesn’t he? Is either brother right for Carla?

I flew through Drop. I was captured by Carla’s struggle against what she wanted and what she needed and desperation to be a part of something.

With Carla’s mum being an up and coming journalist, desperate to make it into the big time, Carla has spent most of her school years moving around as her mum chases the next step of her career. She's finally made it and they’ve moved to London, just in time for Carla to do her A-levels and she’s determined that for her final school she’ll be someone. She won't skate along the side-lines, she won't just fit in, and she’ll be one of the popular crowd. These are urges every teenager, and most adults, feel a lot of the time, but Carla went down a dangerous route.

Arrogant, gorgeous and care-free Finn Masterson is the epitome of cool at Carla’s new school and she’s determined to have him. Her determination to be accepted into his crowd of friends, be admired by the rest of year 12 and have Finn pay attention to her is worth everything to Carla, even when it means taking pills and doing lines of coke while her brain is screaming warnings at her. It was a horrible mix of heartbreaking and fascinating to watch Carla descend into addiction, and surprisingly quick. The effect it had on the rest of her life was obvious and startling as the rest of the group seemed so at ease with it. It was difficult to watch, but it made her resolve to drag herself out the other side even more satisfying. All things considering, Carla got off pretty lightly and I’m really glad her story ended with hope and possibility and the life she was searching for from the beginning.

Drop is a wonderfully written and effortless to read debut about art, love, the desperate need to fit in and finding yourself. Katie Everson is definitely a name to watch.