Blast From the Past: The Day of the Triffids 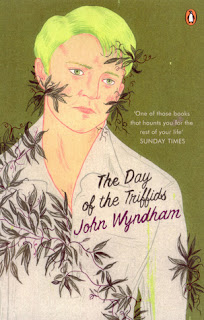 Originally published in 1951 by Michael Joseph

My edition: the lovely 2008 illustrated paperback from Penguin

What’s it about?
When a freak cosmic event renders most of the Earth’s population blind, Bill Masen is one of the lucky few to retain his sight. The London he walks is crammed with groups of men and women needing help, some ready to prey on those who can still see. But another menace stalks blind and sighted alike. With nobody to stop their spread, the Triffids – mobile plants with lethal stingers and carnivorous appetites – seem set to wipe out the survivors.

Why now?
I’ve wanted to read this ever since I saw a TV adaptation years ago, but talking to Stacey (Pretty Books) about how much she enjoyed it finally prompted me to buy it and read it for the Classics Challenge!

Right from the very beginning, an eerie, unsettling atmosphere crept over me as I read. Bill wakes up to a still and silent London after a week of blindness after eye surgery and The Day of the Triffids is what he calls his personal account of the fall of civilisation. Maybe it was that Bill was recounting his story directly for the reader, but it felt scarily real and completely possible to me. It also felt incredibly current. Triffids was published in 1951 and yet it read as if it could have been published yesterday, minus the lack of technology.

John Wyndham is seen as a pioneer of post-apocalyptic and dystopian fiction and I can really see why. I’ve read veer little in these genres outside of YA and I was really surprised at how different it is. The end of the world in YA is usually based on a natural disaster, but in a very different way to Triffids; there’s a sense of history and build up to them. The destruction of our planet that Bill experiences is cumulative and a human problem rather than a sudden, uncontrollable and extremely dramatic event. It’s more in line with the type of catastrophe that I read in what I think was the first post-apocalyptic book I read – Life as We Knew It by Susan Beth Pfeffer. The deterioration was slow and steady but it changed the world inexplicably.

One of my favourite things about The Day of the Triffids is the questions that it asks about the responsibilities and role of the people that remain sighted after the meteor shower. Bill and Josella – a woman he meets very early on in the story who is also sighted – debate frequently on whether the sighted have a duty to look after the blind or whether they are just prolonging the inevitable. Is it not better to use their sight to look after themselves and start to prepare for the future and rebuild the world? This also extends into the two types of people that the end of civilisation produces: those who arm and dominate and those who rebuild and prepare. This book really made me think.

I thoroughly enjoyed The Day of the Triffids so I’ll definitely be reading more of John Wyndham’s backlist. I’m thinking either The Midwich Cuckoos or The Crysalids next…

Still not convinced?
- One of original dystopians.
- It’s sixty-odd years old and still reads as fresh and relevant and very accessible.
- Man-eating plants – what more do you need to know?!