Am I Normal Yet?, Holly Bourne 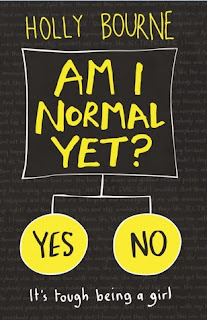 Other Titles by this Author: Soulmates, The Manifesto on How to Be Interesting

All Evie wants is to be normal. And now that she's almost off her meds and at a new college where no one knows her as the-girl-who-went-nuts, there’s only one thing left to tick off her list…

But relationships can mess with anyone’s head – something Evie’s new friends Amber and Lottie know only too well. The trouble is, if Evie won't tell them her secrets, how they can they stop her making a huge mistake?

All of the UKYA community got giddy with excitement when early copies of Am I Normal Yet? made an appearance at YALC and then the rave reviews came rushing in and I pre-ordered it on the spot. Boy, am I glad I listened to my friends!

I can't begin this review without first mentioning the authentic and empowering representation of mental illness. Evie has OCD – in the form of a fear of germs and uncleanliness – and Generalised Anxiety Disorder. When we join Evie, she’s lived with her mental illness for three years. She’s been sectioned, on lots of medication and unable to leave the house. Now her dose is drastically lowered, therapy seems to be working and she’s starting college, determined to be a normal sixteen-year-old. I loved the honesty that Bourne gave Evie’s struggles. She didn’t shy away from the hurt, the anger, the desperation and the simple joys of Evie’s life. It felt so authentic.

One of my favourite things about Am I Normal Yet? is how vibrant Evie’s voice is. Her narration is sassy, witty and friendly; I loved being in her world, even when it got heartbreaking. Evie wasn’t the sum of her illness, even though it was undoubtedly a big part of her life. She still had friendships to navigate, boys to try and decipher, college to attend and feminism to learn about. The dynamic between Evie, Amber and Lottie, and Jane as well were wonderful. I loved the support and respect and genuine affection between them as well as the pain of drifting apart from Jane in the wake of her new boyfriend, Joel. I really like it when female friendships are one of the most important parts of the novel.

With the friendship between Evie, Lottie and Amber, the Spinsters Club was born. The girls discovered in the innate sexism in the English language: is there a male version of a spinster? A male version of slut? Nope. They decided to reclaim ‘spinster’ and formed a club where they discussed feminism and how it related to their lives. This opened up dialogue with the reader to situations and ideas that they may not have considered before; such a wonderful, fun way to introduce teens to feminism. They discussed periods (side note: I had never considered the horror of menstruating when you suffer from the type of OCD Evie does; awful), stereotypes, double standards, gender roles, labels and the Bechdel test. Seriouosly fantastic stuff.

Holly Bourne is an incredibly important voice in YA and I’ll definitely be digging into her backlist and putting her future releases straight on my wishlist. Am I Normal Yet? is an empowering, emotional and honest novel that should be available to all teens.