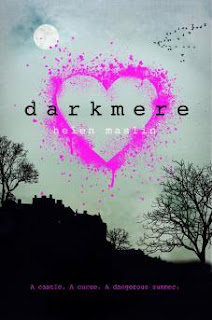 Outsider Kate has a crush on the coolest boy in school, Leo. He’s inherited a castle, a menacing ruin on the rugged English coast. When he invites her along for the summer, she finally feels part of the gang.

But Darkmere’s empty halls are haunted by dark ghosts. Two centuries ago, Elinor – the young wife of the castle’s brooding master – uncovered a dreadful truth.

As past and present intertwine, Kate and Elinor find themselves fighting for their lives – and the ones they love.

Darkmere is a story of an old castle, a vengeful curse and a group of teenagers determined to party the summer away.

I was really suckered by Leo in the beginning of the novel. I liked that he wasn’t shiny and polished and perfect like lots of YA heroes, but scruffy and a little arrogant; he seemed like a teenage boy! But then that like quickly turned to annoyance, then to dislike and finally to all-out hatred. I also didn’t feel much of anything for Kate which meant that it took me a good 150 pages to become even somewhat invested in the story, and when I did, it was largely down to Elinor’s story.

My relationship with historical fiction is notoriously unpredictable. I either love it or I hate it, and I loved reading Elinor’s journey from her first London season to becoming to the first mistress of Darkmere to her tragic end. Elinor’s story starts in 1825 and her chapters were immersive and vivid. Maslin clearly did a lot of research into the period and the experiences of a young woman in that time and it really showed. But it also left Kate’s present day adventures at Darkmere in the shadow for me. I could happily have read an entire novel about Elinor. I did, however, really like the way that Kate and Elinor’s stories paralleled each other and eventually intertwined. I've always been fascinated by the idea of history repeating itself or leaving echoes through generations and Darkmere captured those ideas wonderfully.

Though Darkmere and I had a rocky start, I ended up enjoying it a lot. I’ll definitely be looking out for more from Helen Maslin in the future.