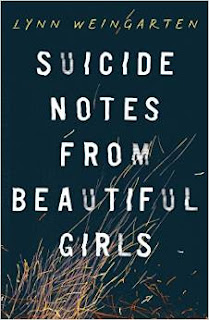 June and Delia used to be closer than anything. Best friends that comes in that way before everything else. They had a billion secrets, tying them together like thin silk cords. But one night everything changed. And now, a year later, Delia is dead.

June is certain she was murdered, but the truth is more complicated than she ever could have imagined…

I flew through Lynn Weingarten’s debut. I was so eager to find out what really happened with June and Delia that I couldn’t stop turning the pages!

I really liked the narrative format of Suicide Notes from Beautiful Girls. June is telling us her story in the aftermath of Delia’s suicide, but the novel also flashbacks to different times and places over the history of their friendship and leads up to a time when they weren’t as close as they used to be. Those flashbacks are written in third person which I found really interesting. I liked the feel of the voiceover narrating the background, filling in the blanks that June didn’t want to tell us because either it was too painful or she didn’t want to acknowledge how what she’d learnt had changed those moments into. Really clever.

This was a novel filled with secrets and I loved watching them reveal themselves and paint a picture of Delia’s unravelling into darkness and recklessness. It was leading up to the twist (which I did guess) and I was expecting to be an explosive ending, but it actually occurred halfway through the novel, neatly dividing it into two parts. And I’m still not quite sure how I feel about that, though I do know that for me it took away the punch of the ending and I wound up feel a little dissatisfied with how the novel wrapped up. I can’t quite put my finger on why, but it just didn’t hit the spot for me.

However, Suicide Notes from Beautiful Girls is a fast-paced, intriguing and thoughtful debut that I really enjoyed.