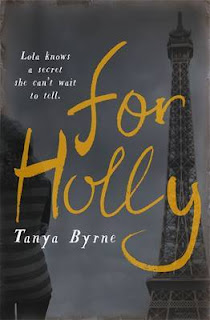 Other Titles by this Author: Heart-Shaped Bruise, Follow Me Down

Lola Durand can’t get through to her father. He never wants to talk about the things that matter: why they had to move to Paris, why he had to marry evil Agatha, and how they can get through the heartache of her mother’s death together.

If he won’t listen, she’ll show him. She’ll show him the truth about his new wife and then her life can go back to normal, just the way she likes it.

Lola Durand knows a secret about her stepmother. She’s going to share it.

As always with Tanya Byrne’s novels, For Holly delivered an intense, beautiful written and tautly paced novel that I never wanted to put down.

For Holly is an incredibly emotional read. It’s only been around six or seven months since Lola’s mum died suddenly and already her dad has moved on. He’s now living in Paris with his cold, hard fashion designer wife whom Lola hates. The story is drowning in thick, choking grief and it only get more and more powerful with every chapter. I felt everything Lola felt so acutely that I was choked up for most of the second half of the novel and a few tears even escaped on a couple of occasions. I had to purposefully not take it out with me! It was gut-wrenchingly real.

I was expecting Lola butting heads with her stepmum to be the main focus of the novel, but I really loved that For Holly centred on her relationship with her dad. Like the grief, the resentment and anger and hurt and betrayal all built up steadily over the novel until I thought Lola might actually combust from the boil of feelings inside her. I really enjoy relationship dynamic where there’s some major miscommunication and Lola and her dad may as well have been on opposite ends of the planet for how well they communicated! Feelings of neglect and loneliness are very much a teenage state of being, but Lola has so many reasons for them to be enhanced and her dad just doesn’t know how to connect with this young woman anymore.

For Holly is another stand-out novel from Tanya Byrne. She’s a seriously talented writer and I’m already looking forward to what she gifts us with next.