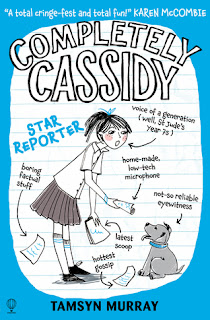 So I started this petition to let girls wear trousers at St Jude’s, and everybody’s talking about it – including Kelly, Year Ten editor of the school magazine. And now she’s asked me to be her star reporter – yay!

Even better, I’ve already sniffed out a *big* exclusive. Because someone’s set up a nasty gossip website about people at school – and if I can identify the mystery blogger, it’ll be the scoop of the century!

A few months ago I was introduced to Cassidy Bond and fell in love! I enjoyed her second adventure, Star Reporter, just as much.

Cassie is still on a mission to discover her ‘thing’. Being an accidental genius didn’t quite work out, even though she loved being on the school quiz team, but now the team is no more and she’s trying to find something to focus on. Cassie’s mum is a bit of a zombie, Liam is still embroiled in Wolf Brethren (his strangely popular band) and her newborn twin brother and sister who are cute, but tend to scream bloody murder at 3am – she just needs something.

With Cassie’s petition to allow girls to wear trousers at St Jude’s getting more and more popular, she’s suddenly part of the school press gang. Watching Cassie try and figure out all of the journalism lingo and the sudden change in the way she had to act with information about her friends and classmates was sometimes hilarious, sometimes tense and other times heartbreaking. I really felt for her!

I’m really looking forward to being reunited with Cassidy again soon as she continues to try and find her thing.