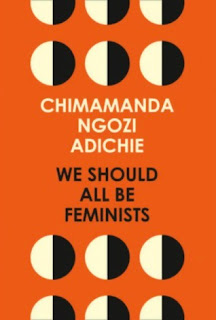 We Should All Be Feminists, Chimamanda Ngozi Adichi

Synopsis
What does ‘feminism’ mean today? That is the question at the heart of We Should All Be Feminists, a personal, eloquently argued essay – adapted from her much-viewed TEDx Talk of the same name – but Chimamanda Ngozi Adichie, the award-winning author of Americanah and Half of a Yellow Sun. with humour and levity, here Adichie offers readers a unique definition of feminism for the twenty-first century – one rooted in inclusion and awareness.

Mini-review
Adichie talks about feminism from a very personal standpoint and in relation to a culture that I know very little about. Being a woman, particularly a feminist woman, in Nigeria is tough. You aren’t greeted when you enter a restaurant; in fact, in some restaurants, a woman isn’t allowed in on her own; women aren’t allowed to speak for their community among the Igbo people, where Adichie was brought up; women are trained to be marriage material. It all sounds very Victoria, but that’s how it is there and it’s scary.

The ideas of what is feminine and how she herself counteracts those in her teaching, her writing and her view on women in society lays nicely next to the constraints of masculinity. Adichie says that men need to be taught that feminie is not bad, you don’t have to oppose all of the typical feminine traits to be seen as masculine. Socialisation exaggerates gender into inescapable social constructs that cannot possibly fit every woman.

This is an eye-opening and important speech and I sincerely hope that it’ll be read by young people everywhere. 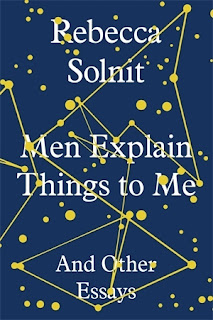 Synopsis
In her iconic essay ‘Men Explain Things to Me’, Rebecca Solnit investigates the conversations of men who wrongly assume they know things and wrongly assume women don’t.

This famous and influential essay is included here along with the best of Solnit’s feminist writings. From rape culture to grandmothers, from French sex scandals to marriage and the nuclear family, and from Virginia Woolf to colonialism, these essays are a fierce and incisive exploration of the issues that a patriarchal culture that will not necessarily acknowledge as ‘issues’ at all. With grace and energy, and in the most exquisite and inviting prose, Rebecca Solnit proves herself a vital leading figure of the movement and a radical, humane thinker.

Mini-review
This collection of seven essays from Rebecca Solnit provides an easy to read and accessible introduction to feminist writing that is perfect for younger readers or those just being introduced to feminist literature.

Solnit covers a range of topics, including male entitlement, rape culture, rape and sexual assault, traditional gender roles, marriage, control, confinement, the disappearance of women, how far we’ve come and how far we have yet to go. She does all of this with humour and brevity; there’s no sense of overcomplicating things that don’t have to be, she’s not patronising or belittling in any way and nothing is overblown.

Most of the ideas in Men Explain Things to Me and Other Essays were ones I had come across before but it was really interesting (and terrifying) the read the extra anecdotes, news stories and statistics to back those ideas up. It makes for powerful reading and a great launching pad for those interested in feminism. Highly recommended. 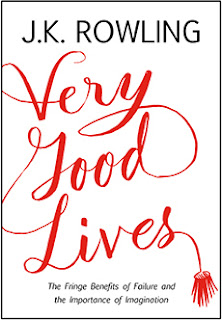 Synopsis
In 2008, JK Rowling delivered a deeply affecting speech at Harvard University. Now published for the first time in book form, Very Good Lives offers JK Rowling’s words of wisdom for anyone at a turning point in life, asking the profound and provocative questions: How can we embrace failure? And how can we use our imaginations to better both ourselves and others?

Drawing from stories of her own post-graduate years, the world-famous author addresses some of life’s most important issues with acuity and emotional force.

Mini-review
Before I even get to the insides, I just have to mention how beautiful this book is as an object. Underneath the simple dust jacket is a beautiful read hardcover with a pattern of graduation caps on it – I love it when publishers jazz up the naked hardcover! But the illustrations continue.

Alongside JK’s inspiring words are gorgeous red, red, white and grey illustrations and quotes that have been transformed into gorgeous typography. There’s something to marvel at on each page.

The speech itself is funny, witty, inspiring and thought-provoking and I loved the messages about the importance of failure and the ability of imagination to transform you and give you an intense sense of empathy. I also really liked the point that JK made about the burden and privilege of graduating from an institution like Harvard. They are people not used to failure or struggle or lack and how they should use that position for the good of everybody. I thought that was an incredibly important point, and probably something a few of those graduates should definitely think about with the moves they make in their lives and career.