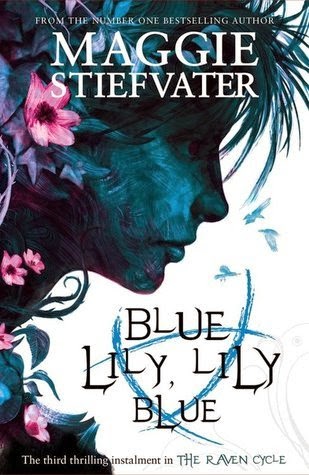 Other Titles by this Author: Lament, Ballad, Shiver, Linger, Forever, Sinner, The Scorpio Races, The Raven Boys, The Dream Thieves

The trick with found things is how easily they can be lost...

After a week of bingeing on this series I have finally read Blue Lily, Lily Blue and I honestly don’t know how I’m going to follow it up with a book not concocted in the depths of Maggie Stiefvater’s brain.

Maggie Stiefvater stepped up the intensity with Blue Lily, Lily Blue. Feelings were admitted, friends were made, relationships were forbidden and people died. And it was all kinds of heart-wrenching, especially when Blue and Gansey were involved. Ugh, they just give me all the feels. I love the sense of their affection for each other. It feels genuine and complicated and it grows with each and every day. Every single interaction is fraught with frustration and denial and torment. The strange and unnecessary late night phone calls that were purely to hear the other’s voice and ugh, heartache. I sincerely hope that this turns out okay for them eventually.

As well as Gansey and Blue’s relationship developing, the rest of the characters did too. Even as Ronan veered closer to the edge and wildly back again, he just became easier to fall in love with because there’s so much to him. And Adam just got creepy and unpredictable, but he also discovered something incredible important with his new connection with Cabeswater: he is strong, but has pushed everyone away in pride and that all Gansey and Ronan ever offered him was love and friendship.

I don’t want to say too much more about Blue Lily, Lily Blue because I think this series is best experienced with a blank slate, so I shall leave you with the knowledge that the third instalment of this series will make your heart ache and there’s a big ‘ole “oh, crap...” moment at the end.

Read it. You won’t be sorry.