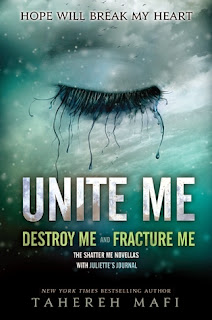 Other Titles by this Author: Shatter Me, Unravel Me, Ignite Me

The Shatter Me trilogy is one of my favourites of the last few years so I leaped in Unite Me when I spotted in in Foyles at the weekend. It was so lovely to be once again ensconced in Tahereh Mafi’s gorgeous prose.

In a collection of two novellas from vying love interests there is bound to be a favourite, but I didn’t expect to pick a favourite so severely! Warner’s narration is much stronger than Adam’s and I felt like there’s just generally more to his character – I’m more invested in his thoughts and feelings. Destroy Me is an ode to complex, messed-up, beautiful boys.

Destroy Me would have been the perfect thing to read after finishing Shatter Me when Warner is still a cold, confusing monster. The light it sheds on his actions and motivations is wonderful. He sees the world so differently to lots of the other characters, especially in his view of Juliette. I love how convinced he is of her power and her potential. He sees her as an all-encompassing force of nature that’s capable of incredible things.

The stark difference of Adam’s opinion shows in Fracture Me. Though it begins to show in Ignite Me, here Adam shows just how little he understands how Juliette has changed and evolved from the scared, timid, little girl she was at the beginning of the series. He still thinks her childish and unable to handle herself and the world around her. I really love that this series showed that relationships evolve as people do. Very refreshing.

Unite Me is a tantalising glimpse back into a trilogy I love and it’s made me want to experience it all over again!