Blast from the Past: The Outsiders 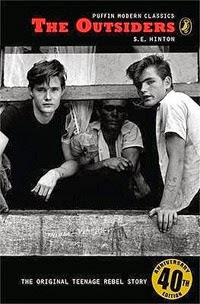 Originally published in 1967 by Viking Press

What’s it about?
The Soc’s idea of having a good time is beating up Greasers like Ponyboy. Ponyboy knows what to expect and knows he can count on his brothers and friends – until the night someone takes things too far.

Why now?
Honestly, I wanted something short and strong but still a classic and The Outsiders immediately jumped to mind. I felt that not having read it after being alive for 22 years was a travesty.

The verdict:
I went into The Outsiders completely blind. All I knew was that there was a character with the ridiculous name of Ponyboy and the classic line ‘Stay gold, Ponyboy. Stay gold...’. I’m so glad I went in with no prior knowledge of the story or the characters – it really delivered an impact that way.

Within a few pages I was blown away by the strength of Ponyboy’s narrative. Written in direct, first person, past tense, I was immediately launched into a world of strange slang, greasers and socs, drive-in movies, Beatle-mania and teenage boys who are proud but resigned to their future as hoods. And a captivating world it is. Ponyboy’s strong, definitive voice carries you through The Outsiders with a sense of jaded innocence, warmth and feeling. He captured my heart.

The sense of brotherhood, by blood and by friendship, was the main theme of the novel for me. Ponyboy’s oldest brother, Darry, was a character that resonated with me. After the death of their parents, Darry took on the care of Soda and Ponyboy and though he didn’t always come across in the best light, what he had sacrifice to keep his brothers’ lives as normal as he could touched a chord with me. And Soda’s position in the middle of the warring Ponyboy and Darry was a surprise addition that I had never considered. All three boys made up a family and with the rest of the gang, a bigger extended family. The way they protected each other at the cost of themselves and were unshakably loyal to the rest of the greasers made me almost sad that I’m not a part of something like that. Maybe with the exception of the horrific consequences of the battle between Socs and Greasers.

Finishing off with the message of Ponyboy, Johnny, Soda, Dally and Darry being more than greasers was more powerful than I imagined it would be and I want to read it again.

Still not convinced?
- If you like gritty, rebellious fiction with a strong voice, this is your novel.
- We’re only a few years away from the 50th anniversary.
- Ponyboy.