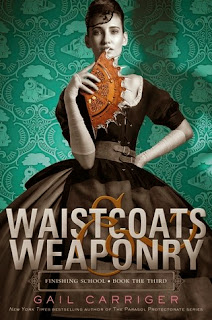 But when Sophronia discovers they are being trailed by a dirigible of Picklemen and flywaymen, she unearths a plot that threatens to throw all of London into chaos. With her friends in mortal danger, Sophronia must sacrifice what she holds most dear – her freedom.

Gather your poison, your steel-tipped quill and the rest of your school supplies, and join Mademoiselle Geradine’s proper young killing machines in the third rousing instalment of the New York Times bestselling Finishing School series.

This series is one my favourites for escapism. The steampunk world of Mademoiselle Geraldine’s Finishing School for Young Ladies is full of fun, adventure, close calls and Waistcoats & Weaponry is the best so far.

After a dramatic start with the strange antics of the...altered Professor Braithwaite, Sophronia and Dimity get launched into lessons of the art of seduction. Watching the girls fuss and giggle and ask innocent questions that made themselves blush was so endearing and it also made me sad for our generation that interactions between the sexes are so commonplace and known about so young. The effects of Sophronia’s learnings on Felix and Soap were hilarious though seduction techniques – who knew such simple techniques could be so effective?! Especially as it launched posturing and snarling and hissing between the two boys. So much fun.

During their efforts to reunite Sigheag with her troubled werewolf pack, lots of feelings were brought to the boil. Sophronia was having to figure out just how to employ her new seduction techniques in the right way, while working out what she wants. And who. There were many sweet, romantic and funny moments that came with this and I know I have a firm favourite in Soap, even though English society would have forbidden it in 1853. Soap is a sootie – black and of the lowest class – he is not even to be seen talking to Sophronia in public. It was heart-breaking and introduced the injustice of the social systems in a subtle but thought-provoking way. These divides let to some completely unexpected plot twists that are really going to change the direction of the series. I can’t wait to see how it turns out.

Waistcoats & Weaponry was such brilliant fun that I didn’t want to end. Bring on book four!

Thanks to Atom for the review copy.