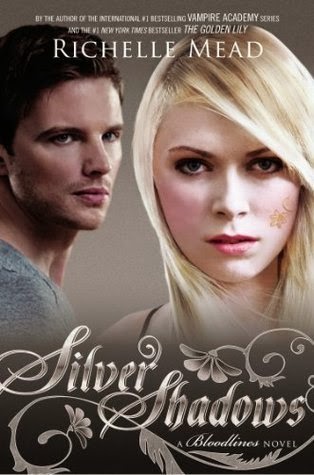 In The Fiery Heart, Sydney risked everything to follow her gut, walking a dangerous line to keep her feelings hidden from the Alchemists.

Now in the aftermath of an event that ripped their world apart, Sydney and Adrian struggle to pick up the pieces and find their way back to each other. But first, they have to survive.

For Sydney, trapped and surrounded by adversaries, life becomes a daily struggle to hold on to her identity and the memories of those she loves. Meanwhile, Adrian clings to hope in the face of those who tell him Sydney is a lost cause, but the battle proves daunting as old demons and new temptations begin to seize hold of him.

Their worst fears now a chilling reality, Sydney and Adrian face their darkest hour in this heart-pounding fifth instalment in the New York Times bestselling Bloodlines series, where all bets are off.

Though each book in the Bloodlines has been fast-paced and packed full of adrenaline, I feel like it had been building up to the end The Fiery Heart and the contents of Silver Shadows. We’ve learnt about a new area of this world and the people that rule it – the Alchemists – and we’ve seen one of their best discover that what she’s been taught isn’t quite how she actually feels. And in this fifth instalment of the series, it all comes to blows.

Sydney has been carted off to re-education. There have been hints and rumours at the horrors that re-education holds throughout the series, but nothing could have prepared me, or Sydney, for the reality. The awfulness that she experiences in there sheds a clear light on the Alchemists: they’re sadists. Some of the ways they trying to physically and mentally break Sydney for daring to think for herself made me feel nauseous. And so unbelievably angry. They pride themselves on being human, but they were trying to strip Sydney’s humanity from her. Her strength of character and sheer goodness came across so, so brightly during these chapters and it made me love her even more.

While Sydney was suffering for her ‘sins’, Adrian was losing his mind with worry and panicking that no headway was being made into trying to track her down. It broke my heart to see him fall back into old habits: drinking, partying and using a little too much spirit... But seeing him come back from the brink to fight for Sydney? Adrian has grown and changed so much from when we first met him in Frostbite. He made me so proud! I think Sydney and Adrian’s relationship is so good for both of them and I just want to hide them away so they can be happy without anyone trying to kill them for just a week!

Silver Shadows ends on an evil cliffhanger that had me audibly gasping. I’m so ready (though I’m not sure my heart is...) for the final book in this amazing trilogy. Bring on The Ruby Circle!