Come Back to Me, Mila Gray 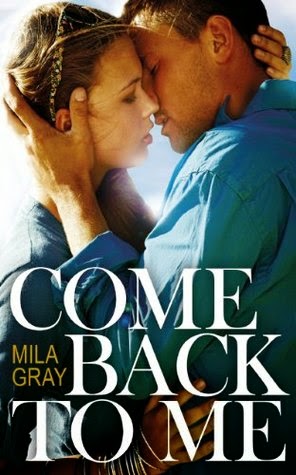 Other Titles by this Author: [as Sarah Alderson] Hunting Lila, Losing Lila, Fated, Severed, Shadowed, The Sound, Out of Control

Home on leave in sunny California, Marine and local lothario Kit Ryan finds himself dangerously drawn to his best friend’s sister, Jessa – the one girl he can’t have.

But Kit’s not about to let a few obstacles stand in his way and soon Jessa’s falling for his irresistible charms.

What starts out as a summer romance of secret hook-ups and magical first times quickly develops into a passionate love affair that turns both their worlds upside down.

When summer’s over and it’s time for Kit to redeploy, neither Kit nor Jessa are ready to say goodbye. Jessa’s finally following her dreams and Kit’s discovered there’s someone he’d sacrifice everything for.

Jessa’s prepared to wait for Kit no matter what. But when something more than distance and time rips them apart they’re forced to decide whether what they have is really worth fighting for.

A breathtaking, scorchingly hot story about love, friendship, family and finding your way back from the edge of heartbreak.

Historically I haven’t got along with NA. I find it cliché, too focused on sex, not enough character development and sloppy writing. It was solely because I knew that Mila Gray is actually Sarah Alderson that made me want to pick up Come Back to Me. I really am glad I did.

The novel opens with an emotional punch: we find out that at the end of the novel Jessa will lose someone. Either Riley, her brother, or Kit, her boyfriend, who are both marines, has been killed in action. And just before the name is announced, Gray throws us into flashback to the beginning of the summer and the arrival of the boys on leave.

Jessa has had a crush on Kit for years, but she’s always been his best friend’s little sister. Or so she thinks. Kit is Hot, with a capital ‘H’, and he has sizzling chemistry with Jessa and I was cheering on their sneaking around. I love stories of forbidden love so damn much. For Jessa and Kit, the obstacles are Riley (overprotective and knowledge of Kit’s tendency to be a player) and Jessa’s scary, scary dad (suffering from PTSD, a Colonel and hates Kit). It actually took me a long time to get to like Riley. He’s judgemental and possessive, he feels a little similar to their dad at points. I have to admit that I had a few errs with Kit too – he’s pretty bloody pushy! I mean, it always worked out in the best way for Jessa, but it did make me cringe a little.

Aside from the scorching romance, the secrets and the sun-drenched California summer, Come Back to Me also tackles some sensitive issues: fighting in wars, death and PTSD. Unfortunately, war is a very topical subject at the moment so it made an impact. Though being in the marines in an American role, one I actually know very little about, the reactions of Jessa’s dad, Kit’s dad, and Kit and Riley themselves seems familiar, and worrying. These four men having experienced unspeakable things across a wide arc of time and in different places all over the world and they all suffer. It’s a sobering thought.

Come Back to Me is an emotional, sexy and addictive summer read. I have high hopes for the rest of Mila Gray’s books.

Thanks to Sarah for the review copy.