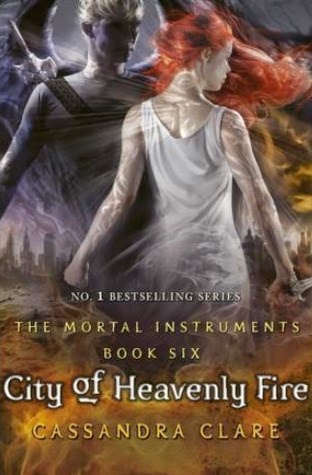 Sebastian Morgernstern is on the move, systematically turning Shadowhunter against Shadowhunter. When one of the greatest betrayals the Nephilim have ever known is revealed, Clary, Jace, Isabelle, Simon and Alec must flee – even if their journey takes them to the demon realms, where no Shadowhunter has ever set foot before, and from which no human being has ever returned. Love will be sacrificed and lives lost in this thrilling and long-awaited final instalment of the bestselling and critically acclaimed Mortal Instruments.

SPOILERS AHEAD. There is no way I can review this book without spoiling events of previous books in the series, or describe my feelings about this without mentioning events in the novel. Read on at your doom...

I have followed Clary and Jace since 2009. That’s how long they’ve been in my heart and in my mind; the ending of their story is a big deal for me, so I was understandably worried about reading City of Heavenly Fire after I was disappointed by Clockwork Princess. But, thankfully, I loved it.

Now, I was perfectly content with how Clary and the gang ended their adventures in City of Glass. I felt that the announcement of the second trilogy was unnecessary and I was scared of the pain my babies would be put through, and I was right to be afraid of the pain... Though I loved Fallen Angels, Lost Souls and Heavenly Fire, I do still think they weren’t entirely necessary, but they were still brilliant and I’m always up for more Shadowhunter fun. Not that anyone had much fun in City of Heavenly Fire...

After rescuing Jace from Sebastian’s evil compulsion in City of Lost Souls, Clary had a marker on her back. Sebastian was going to try and get her back at all costs, and she would do everything in her power to kill him and end the increasing threat to her world. Sebastian is a much better villain than Valentine was. He’s so much more present in the story and his threat seems more bloody and visceral and personal – he wants Clary and Jace – and the death of Shadowhunters. He’s a brilliant character and I felt genuinely creeped out by him, especially with comments he made to and about Clary with regards to them ruling together and his views on how love should be *shudder*.

Sebastian’s threat showed the true colours of the Clave and really gave the next Shadowhunter series, The Dark Artifices, a solid launching pad. As they became more scared of what would happen, they closed themselves further and further off from the world and their people. They underestimated what their warriors would face because they didn’t want to believe their situation was all that bad. The corruption of the Clave and its leaders really came into full view in City of Heavenly Fire and it was a horrible realisation for everybody, but it also sent Clary, Jace, Isabelle, Alec and Simon on their biggest and most dangerous adventure yet: into Hell to rescue Luke, Jocelyn and Magnus from Sebastian’s grasp.

The drastic change in scenery through everyone into a different frame of mind and completely changed the dynamics of the story. As usual, Jace was leading the way, but the power of the Heavenly Fire singing in his veins posed a little bit of danger, and nearly got him carried off by demons. Tensions were high as they trekked across the barren landscape of an alternate Alicante. They were praying the safe retrieval of Luke, Jocelyn and Magnus while not being entirely sure they were still alive, battling with the concept that any or all of them could die at any moment and fracturing with fear and desperation. I think that it was in this book that all of the characters acted the most like human beings – they reacted reasonably and genuinely, they were scared and worried, they were literally in Hell.

I loved that their plans didn’t go smoothly, that there were moments when I gasped in shock and fully believed that maybe they wouldn’t get out of this unscathed – there had a be a big death, right? – and I thought that they might be trapped in Hell. Thankfully, that didn’t happen, but there was a cost to their freedom. I could not believe it when we finally discovered who Magnus’ father is and what his price for their freedom was. I was shocked and horrified and scared. I thought that was it. That would be the thing that ruined the novel for me. I couldn’t been more relieved when Simon swept in and saved the day. I was both relieved and disappointed that there hadn’t been a more shocking and heartbreaking ending as that is what I’d been promised. I couldn’t believe that Jordan was the only death in the collection of vaguely main characters. Not, of course, that I wanted Jace or Alec or Isabelle or Simon aor Magnus to die, but it was a little bit of an anti-climax.

What wasn’t an anti-climax was meeting the stars of the next trilogy: Emma and Jules. I was a bit miffed when I first started the novel that they got so much page time, but I quickly fell in love with them. They’re strong, feisty and five or six years before their story officially starts, there’s already some things that are going to prove a little tricky, and maybe throw up a seriously forbidden romance *rubs hands together with glee*. I’m seriously looking forward to reading The Dark Artifices now. I do love the way that Clare’s series’ interact, especially when we get to see characters like Tessa and Jem. Speaking of Jem, woah. Biggest surprise ever! I loved it. It was a fantastic twist and was probably one of my favourite elements of the novel. I have a feeling we’ll be seeing those two in the next Shadowhunter series; I hope so, anyway.

City of Heavenly Fire had a lot to achieve, and for me, it was a brilliant ending to a series I have loved dearly for a long time. It shoved my heart into my throat, made me chew on my nails with anxiety and got me grinning like a loon. Mission accomplished. I hope Clary and Jace live happily ever after and that we get to catch up with them in further series’.