BLAST FROM THE PAST: Northanger Abbey 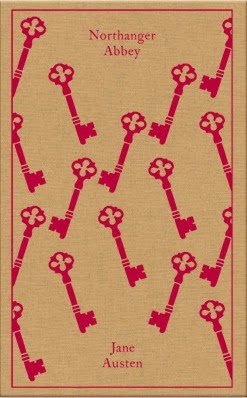 Originally published in 1817 by John Murray

My edition: the gorgeous Penguin Clothbound Classics hardback above

What’s it about?
Catherine Moorland, one of ten and a lover of Gothic novels, goes to Bath to stay with neighbours where she meets Henry and Eleanor Tilney and is whisked off to Northanger Abbey. There, her imagination blurs with reality and she becomes the heroine of her own Gothic novel.

Why now?
One of my reading goals of 2014 is to read the final three of Austen’s novels that I hadn’t read. Northanger Abbey is my second to last, and hearing Bella (Cheezy Feet Books) talk about how good it is – my decision of which one to read next was made!

The verdict:
I have to admit that I knew really little about Northanger Abbey other than the names of the leading couple, Catherine Moorland and Henry Tilney, and that it was the first novel that Austen wrote. It was lovely to go in blind.

Austen wrote Catherine’s story between 1978-9 when she was only 23. Her youth and optimism is clear in Northanger Abbey and it sets it apart from her later novels in atmosphere and style, though it still has Austen signatures - misunderstandings, wild caricatures, a gentle mocking of English class systems and characters you can’t help but fall in love with. Catherine is a naive and bright heroine, though largely unextraordinary, and the same goes for Henry: quiet and funny rather than stoic and distant and not traditionally handsome and straightforward in his desires sets him apart from Darcy, Wentworth, Knightley and Edward Ferrars and makes him, in my opinion, the most up to date of Austen’s heroes. You could plant Henry in 2014 and the only thing that would seem a little off would be his profession!

The major difference I noticed, however, was in style. In Northanger Abbey Austen talks directly to the reader. she is telling me the story of Catherine Moorland, her trip to Bath where she meets the Thorpes and the Tilneys and how it ends in an engagement. Sometimes this kind of narration can pull you out of a story if it is too heavily emphasised, but I generally enjoy it and there really is nothing like feeling that Jane Austen herself is telling you a story.

There is actually very little known about Austen as her sister Cassandra destroyed nearly all of her letters so I loved getting this insight into her thoughts at the time. She is particularly vocal on novels and Gothic literature in Northanger Abbey, and having taken a Gothic module at uni, I actually knew the stories and the titles of the books that Catherine and Isabella were reading! At this time, novels were a leisurely pastime for ladies and they had no consequence; all of the important men read histories and informative non-fiction. It felt a lot to me like the fight YA is having with literary fiction at the moment... And yet Northanger Abbey is a mock-Gothic novel. Austen turns the conventions of the Gothic novel on their head to make her funniest novel, I think so, anyway.

One of the things I have come to expect from Austen’s novels is a handful of genuinely frustrating and two-faced characters and we get a whole bunch of them in Northanger Abbey. The Thorpes obviously take the top spot. Like Catherine, I was initially taken in by bubbly, air-head Isabelle and gave her chance after chance as she clearly didn’t mean what she said. WRONG. I took an immediate dislike to the arrogant, slimy and rude John Thorpe though. I just wanted him to go away so I could usher Henry into Catherine’s life instead! They are the opposite of Catherine and the type of friends she needed. The Tilneys are pretty damn awesome, though. I even respected General Tilney at first, even through Catherine’s wild thoughts and accusations towards him, but he turned out to be controlling and materialistic jerk as well!

General Tilney’s revelation that he only encouraged his daughter’s friendship with Catherine because he thought her rich and well-connected and then kicking her out of his house when he realised that wasn’t the case made a really strong point about Regency society and marriage. Every social situation, every visit, every nicety had a reason behind it: securing a good reputation and a strong marriage. It’s actually quite disturbing and the importance of achieving this for a woman is paramount. And yet, as Northanger Abbey concluded, there wasn’t any fanfare about the engagement, we didn’t even get to see the proposal!

I didn’t expect to love Northanger Abbey, but I did. Though it doesn’t match Persuasion or Sense and Sensibility for me, it was thoroughly good fun and gave me a glimpse of Jane Austen in her younger years.

Still not convinced?
- It’s Jane Austen; your argument is invalid.
- It was the first of Austen’s novels to be completed, but wasn’t published until after her death.
- Northanger Abbey is a mock-Gothic.