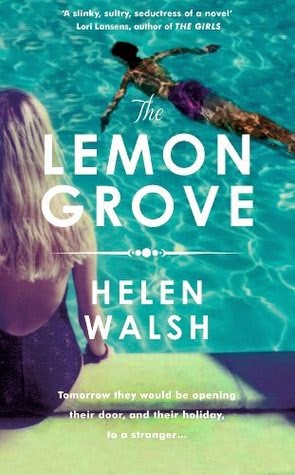 OTHER TITLES BY THIS AUTHOR
Brass, Once Upon a Time in England, Go to Sleep

SYNOPSIS
Each summer, Jenn and her husband Greg return to Daia, on Mallorca’s dramatic west coast. This year the arrival of Emma, Jenn’s stepdaughter, and her new boyfriend Nathan threatens to upset their equilibrium. Beautiful and reckless, Nathan stirs something unexpected in Jenn. As she is increasingly seduced by Nathan’s youth and the promise of passion, the line between desire and obsession begin to blur, what follows is a highly-charged liaison that puts lives and relationships in jeopardy. For Jenn, after this summer, nothing can ever be the same.

VERDIT
I went into The Lemon Grove having heard very mixed things and knowing only the basic outline of the plot and that it is sexy.

The emotional depth of the novel was a surprise to me. I loved the tension between Jenn and her stepdaughter, Emma. Their relationship was immediately set up with a touch of sadness and apprehension as Jenn anticipated the arrival of Emma and Nathan a week into their holiday in Deia. Emma is rude, patronising and manipulative and I disliked her immediately. It was clear that Emma had once been a daughter to Jenn and now at fifteen, she had rejected that and used the fact that Jenn wasn’t her biological mother as a tool. I felt so bad for Jenn. And yet their relationship felt genuine; it was a true mother-daughter relationship in all its affections and arguments, trials and tribulations.

Then Nathan strolls in and everything is heightened. Even though Jenn can see the way that Nathan manipulates Emma and his situation, she can’t help but become viscerally attracted to him. I really liked that the connection between Jenn and Nathan was based on lust and sex rather than love; I haven’t read it that way before. At first Jenn still genuinely loves Greg and it takes a fair while (in such a short novel) for her to succumb to Nathan’s charms and when she does start to see Greg in a different light. Her disdain grew steadily and she hated every time it crossed her mind.

Jenn and Nathan’s relationship was uncomfortable and aggressively sexy. There was no affection or real relationship between them, it was just sex. And there was quite a bit of it. I was slightly embarrassed to be reading it on the pane in case the person next to me could see over my shoulder! It was graphic. Even with this, it was still difficult for Jenn to figure out what would happen. And then came the incredibly cruel end where we thought Jenn had gotten away with it, but suddenly, everything could unravel... Very clever and impactful ending.

The Lemon Grove is a tense and sultry novel that makes literary fiction feel accessible and effortless. Highly recommended.

SHOULD IT HAVE STAYED ON THE SHELF?
Definitely not. I really enjoyed reading a popular adult book that had been all over the place for ages, and actually loving it! A sultry, addictive and quick summer read perfect for banishing the quickly approaching Autumn.