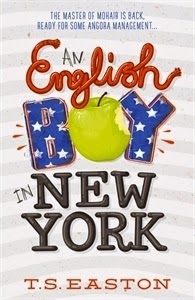 Other Titles in this Series: Boys Don’t Knit

The master of mohair is back!

Fresh from his triumph at Knit fair UK, Ben Fletcher has now been invited to New York to take part in another competition, and his imagination is already working overtime: diners, romantic strolls in Central Park with his girlfriend Megan, and epic knitting!

But Megan mysteriously pulls out, so Ben is forced to take his mate Gex – wannabe gangsta and major liability.

Is Megan cheating on Ben? And can he last a week without wanting to push a knitting needle up Gex’s nose?

Boys Don’t Knit was one of my most pleasant reading surprises of the beginning of the year so I was very excited to pick up a copy of An English Boy in New York at YALC.

Ben’s prize for winning the knitting competition in Boys Don’t Knit is a trip to New York and Knit Fair USA. And there’s something about The Big Apple that turns Ben into a bit of a girl magnet, which is all round hilarious. And a companion of Gex means that he’s also getting into a bit more trouble than he had planned... I have to admit that I really struggled to see Gex as the charmingly idiotic best friend; he’s actually just an idiot for most of the novel. It wasn’t until the end that I realised why him and Ben are actually friends.

Lots of Ben’s time in New York was spent doing PR: giving interviews, meeting with scary businessmen and saying things he really doesn’t quite mean. All of this led to Ben battling a knitting machine in front of huge audience. For most of the novel, I wasn’t as fussed by it as I did the first book. Ben’s charm and awkward adorableness was there, but there was a little something missing. Once it got into the home stretch and it became about Ben and his knitting rather than Megan or Brandi or being a newly famous British boy knitter, I remembered what I loved about the first book.

Though I didn’t enjoy An English Boy in New York nearly as much as I did Boys Don’t Knit, I still love Ben and I’ll definitely read his further adventures.