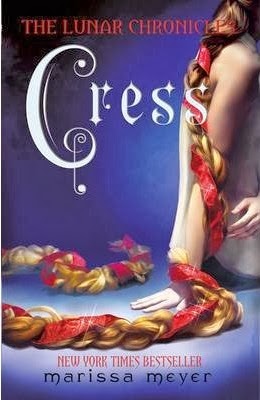 Other Titles in the Series: Cinder, Scarlet

Incarcerated in a satellite, an expert hacker and out to save the world – Cress isn’t your usual damsel in distress.

Cress grew up as a prisoner. With only netscreens for company, she’s forced to do the bidding of Queen Levana. Now that means tracking down Cinder and her handsome accomplice Emporor Kai. But little does Queen Levana know that those she seeks, and the man she loves, are plotting her downfall...

It’s rare to find a series where each instalment blows me away, but Cress has proved The Lunar Chronicles to be one of those series.

The third heroine of this motley crew is thrown into this mix with a bang. I love Cress. She’s a Lunar hacker abandoned in space with a reliance of fantasy and imagination to get her through the lonely hours. I felt weirdly in tune with her need for that. Her knowledge of how great adventure and love stories play out and the way she reminds herself how things should go because that’s what happens in the stories is something I definitely understand, and I imagine you all do too. Her undying crush on Thorne and her imaginings of him contrasting with the real deal were something we’ve all had to face, but I’m still holding out for a fairytale ending to that one. They just work.

Cinder, Scarlet and now Cress are an unlikely group of friends, but they couldn’t achieve what they do alone. Each girl is different is talent, skills, background, situation and history and yet they are all essential to the plot to rid Earth of Queen Levana. Without even one of their skills, the crazy stunts they pull in Cress just wouldn’t work and I wouldn’t have been left (mentally) clap-ping and cheering at the end, reading for Winter already. Speaking of Princess Winter, we finally get wind of her in this instalment of the series, and she is by far the...most different of the girls and I honestly don’t know how she will fall into the plots and plans of the final book, but I’m bloody excited to see how that crafty Marissa Meyer does it.

With all of the dastardly plans and ridiculous timescales to fit them to, along with their deadly repercussions, had me a tense, wired mess for the last hundred pages or so. It was brilliant; I really love it when books have such a physical effect on me. And really, if you knew what was going on there, you’d totally understand...

Cress was tense, high octane and full of intrigue and danger and I’m both eager to read Winter and finish this wonderful series and hating the fact that there’s only one more book.