The Sound of Us - Ashley Poston 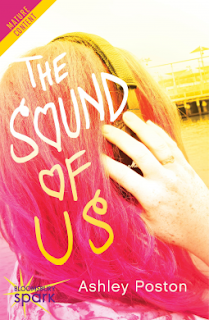 From Bloomsbury Spark, the hilarious and heart-warming story of a classic-rock girl and a pop-star boy...

America’s favourite pop-band, Roman Holiday, is done, dead, and so totally last year. For eighteen-year-old rockaholic Junie Baltimore, this is music to her ears. But when she discovers their sexy ex-lead singer hiding out on the boardwalk, her summer vacation becomes the cover story of the year.

She’s willing to keep him a secret, but when a sleazy paparazzo offers her the cash to save the bar her father left behind, could she sell out a chance to save her future? Who is she kidding? That’s a no-brainer...but she never planned on falling head over heels for the lead singer.

The Sound of Us is fun, sweetness and pure escapism from beginning to end; a lovely way to spend a train ride or a rainy afternoon!

With a newspaper article detailed suspected details of the death Holly Hudson, member of famed pop-rock group Roman Holiday, and the subsequent demise of the band, intrigue and juicy gossip through me straight into the heart of the story. I loved how Roman and the world’s struggles with Holly’s death compared to Junie dealing with her dad’s death. Her grief and strength when it came to ploughing on with running his bar, The Silver Lining, made my heart ache. Everything she felt in connection with him felt so visceral. Every time Ashley Poston wrote about Junie’s feelings about the situation I was shocked by how weirdly wonderful it was writing-wise; she got some of the feelings down to a tee and described them gorgeously.

Junie herself is a fantastic heroine: spunky, brave and so alive. Her love of classic rock felt a little cheesy and obvious at first but it eventually developed, with the help of background stories and a real connection to the songs and bands, into something that resonated and felt truly a part of her character. I also think that harder edge to her gave her feelings for Roman and their relationship an added depth.

Roman himself is a brilliant, and slightly unconventional, hero. He is nowhere near perfect and he had a bit of a punky hipster thing going on that would have been perfect in Vivienne Westwood’s 70s London. Roman is unapologetically himself, good and bad, he has a refreshing sense of humour and outlook for a young celebrity. I also loved his bromance with former-bandmate Boaz. So adorable!

The Sound of Us is a debut that’ll speak to your musical heart and rock-star pining heart with spades of humour, fun and warmth.

Thanks to Bloomsbury Spark and NetGalley for the review copy.