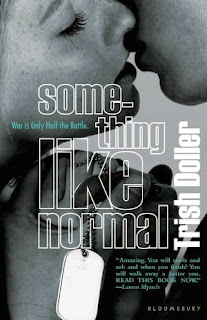 Other Titles by this Author: Where the Stars Still Shine

When Travis returns from Afghanistan, his parents are splitting up, his brother’s stolen his girlfriend and his car, and the nightmares of his best friend getting killed keep him completely spooked. But when he runs into Harper, a girl who despises his for rumours Travis started back in middle school, life actually starts looking up. And as he and Harper see more of each other, he falls deeper in love with her and begins to find his way through the family meltdown, the post-traumatic stress and the possibility of his own strength and incredible sense of honour make Travis an irresistible and eminently lovable hero in this fantastic and timely debut novel.

There was a real buzz around Something Like Normal when it first came out last year and I’ve been wanting to read it since. I finally picked it up last week and flew through it.

It’s still unusual to find a contemporary YA novel written in the perspective of a guy, especially ones at the upper age range, so Travis’ narration was refreshing and I loved it. The way he thought and spoke about sex, girls, his family, what he shared with the world was so different to a girl’s narration (obviously) and I really felt like I was learning about him. I was really pleased that there was a fairly high level of swearing in both elements of the narration as well. It just felt so authentic; the guy is a Marine after all!

The authenticity carried through to the relationship between Travis and Harper. They started out with friendship – a slow, timid friendship because of their rocky history – and watching them get to know the new versions of each other was perfect. But it wasn’t perfect at all. Travis messed up big time, but they had a strong enough foundation to get over it and what they had was more important. Harper also helped him monumentally in coming to terms with how he was struggling in the aftermath of Afghanistan.

Travis’ PTSD is ever-present and sits disquietly under the whole story, but it’s also subtle. It’s a part of him and his post-Afghanistan life now. He saw and did horrible things in his first year and although I sympathised with him, I still felt like I could never understand his experiences and that was bolstered even further by the way he related to his old friends and his family compared to the guys he served with. I loved that they were struggling to deal with their experiences as well, all in different ways. I think Trish Doller was making a general point about going to war in Something Like Normal, and it wasn’t a positive one.

Something Like Normal is a powerful and moving novel and I wish I’d read it sooner. I just have to get my hands on Where the Stars Still Shine.

This will be my last post until the 27th so have a lovely, lovely Christmas guys!