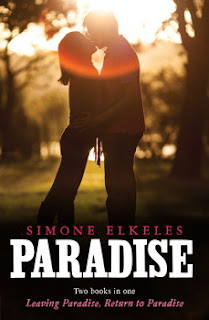 Other Titles by this Author: How to Ruin a Summer Vacation, How to Ruin My Teenage Life, How to Ruin Your Boyfriend’s Reputation, Perfect Chemistry, Rules of Attraction, Chain Reaction

Nothing has been the same since Caleb Becker left a party drunk, got behind the wheel and hit Maggie Armstrong. After a year in juvenile jail, Caleb’s free, but coming home doesn’t feel as good as it should when his family and ex-girlfriend seem like strangers. Months of painful physical therapy have left Maggie with a limp. Longing to escape the pitying stares, the last person she wants to see is Caleb.

But despite the horror of their shared history, Caleb and Maggie can’t seem to stay away from each other, with the heated attraction between them becoming unbearable. As they struggle with their growing feelings for each other, Claeb and Maggie realise that ultimately, whether they leave Paradise or stay, they must face the truth about the night of the accident, or the secret will forever stand between them.

It’s no secret that I’m a massive fan of Simone Elkeles’ Perfect Chemistry series so when I got an email offering me the bind-up of Leaving Paradise and Return to Paradise which I didn’t even know was happening, I jumped for joy.

Paradise was incredibly easy to read. I flew through the nearly 600 pages in half of two lunch hours and two other sittings; it just flows. I fell in love with Maggie and Caleb immediately and my heart ached for them, especially for Caleb. He was thwarted at every attempt to do right and make connections with the people he hurt and even when he did nothing, the blame was placed on him. I wanted to give him a hug and make it all go away! Kendra, however, needed a punch in the face. One of the notes I wrote while reading literally just says, ‘I hate Kendra. Why do girls like her exist?!’. I think that speaks for itself because you all know immediately what I mean. Right?

At times in the beginning of leaving Paradise I was a little hesitant about the idea about their relationship; it just seemed a little wrong. Then they had scenes together and the electricity sparkled. They were just so right for each other! Their respective situations were so tied up with the other and together they were better. Then Simone Elkeles dropped a bomb that changed everything, for me as well as for Maggie and Caleb. A bomb that I’m going to talk about in the next paragraph so if you haven’t read Leaving Paradise and want to remain spoiler-free, step away.

I was totally bowled over when Caleb revealed that it was Leah who hit Maggie and it changed how I viewed their relationship, how reluctant to be ashamed or humbled when he returned to Paradise, Leah’s strange reaction to her brother’s incarceration and most of all, how horrible it was to see him in so much pain for doing something good. It was completely heartbreaking.

Maggie grew and developed so much over the course of Paradise. She went from a fragile and scared little girl to a strong and capable young woman who was willing to fight for herself and for the people she loves. I was so proud of her, and eventually of Caleb too. For the last few chapters I was hoping that I would be treated to one of Simone Elkeles famed epilogues. I was. I think that a bit of cheese is necessary every now and again and that’s definitely what her epilogues are: I love them.

I thoroughly enjoyed Paradise and I cannot wait to read Simone Elkeles’ forthcoming book, Wild Cards. I just hope it makes it over to the UK quickly.

Thanks to S&S for providing me with a review copy.