Today is my stop of the Severed Heads, Broken Hearts blog tour! I have an extract from the very beginning of this gorgeous, gorgeous novel. I hope it convinces you to pick it up. 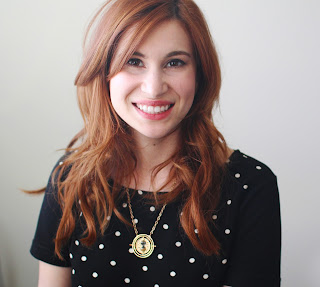 I’d nearly forgotten we were on Pep Rally Schedule until I was halfway out the classroom door, thinking it was break, and someone tapped me on the shoulder.
It was the new girl. She clutched a crumpled class schedule and stared up at me, as though I’d somehow given her the impression that I was the right person to talk to on her first day. I wasn’t expecting her eyes—deep and disquieting and dark blue—the sort of eyes that made you wonder if the skies opened up when she got angry.
“Um, sorry,” she said, glancing back down at her schedule. “First period is supposed to end at nine thirty-five, but the bell didn’t ring until nine fifty—”
“It’s the pep rally,” I told her. “Break is canceled and we go straight to third.”
“Oh.” She pushed her bangs to the side and hesitated a moment before asking, “So, what do you have next?”
“AP American Lit.”
“Me too. Can you show me where that is?”
Ordinarily, I could have. On the first day of junior year, I’d even stopped to help a few confused-looking freshmen in the quad, who’d stood gawking at the maps in the backs of their day planners as though they were stuck in some sort of incomprehensible labyrinth.
“Sorry, no,” I said, hating myself for it.
“Um, okay.”
I watched her walk away, and I thought about how most of the girls at Eastwood, or at least the ones worth noticing, all looked the same: blond hair, lots of makeup, stupidly expensive handbags. The new girl was nothing like that, and I didn’t know what to make of the shabby boys’ button down tucked into her jean shorts, or the worn leather satchel slung over her shoulder, like something out of an old-fashioned movie. She was pretty, though, and I wondered where she’d come from, and why she hadn’t bothered trying to fit in. I wanted to follow her and apologize, or at least explain. But I didn’t. Instead, I grappled with the stairwell near the faculty lot, crossed the quad toward the 100 building, and opened the door of AP American Lit several minutes in arrears of the bell.

I’d had Mr. Moreno before, for Honors Brit Lit. He’d supposedly been writing the same novel for the past twenty years, and either he genuinely loved teaching or he’d never outgrown high school, because it was sort of depressing how hard he’d tried to get us psyched about Shakespeare.
Moreno hadn’t cared that I was late for class; he hadn’t even noticed. The DVD player wasn’t working, and he was on his hands and knees with a disc clutched in his teeth, prodding at the cables. Finally Luke Sheppard, the president of Film Club, arrogantly stepped in, and we all sat and watched The Great Gatsby—the original, not the remake. I hadn’t seen it before, and the film was in black-and-white and sort of bored me. The book had been our summer reading, and the movie wasn’t nearly as good.
What I hated, though, was the part with the car accident. I knew it was coming, but that didn’t stop it from being any less terrible to watch. I shut my eyes, but I could still hear it, hear the policeman telling the crowd of onlookers how the sonofabitch didn’t even stop his car. Even with my eyes closed, I could feel everyone staring at me, and I wished they wouldn’t. It was unsettling the way my classmates watched me, as though I fascinated and terrified them. As though I no longer belonged.
When class let out, I briefly considered the quad, with its harsh sunlight and café tables. My old crew sat at the most visible table, the one by the wall that divided the upper and lower quads. I pictured them in their new team uniforms, the first day of senior year, telling stories about summer sports camps and beach vacations, laughing over how young the freshmen looked. And then I pictured sitting down at that table. I pictured no one saying anything, but all of them thinking it: you’re not one of us anymore. I wasn’t class president, or tennis team captain. I wasn’t dating Charlotte, and I didn’t drive a shiny Beemer. I wasn’t king any longer, so it was only fitting to take my exile. Which is why, instead of gambling my last few chips of dignity, I wound up avoiding the quad entirely and decamping on that shaded stairwell out near the faculty lot with my headphones on, wondering why I hadn’t known it would be quite this bad.

There was only one senior-level Spanish class, which meant another year with Mrs. Martin. She’d urged us to call her Senora Martinez back in Spanish I, but that was completely ridiculous on account of her husband being the pastor of the local Lutheran church. She was one of those cookie-baking, overly mothering types who festooned her sweaters with festive holiday pins and treated us all like second graders.
I was the first to arrive, and Mrs. Martin beamed at me and whispered that her congregation had prayed for me after the accident. I could think of so many more worthwhile things they could have prayed for, but I didn’t have the heart to tell her.
“Gracias, Senora Martinez,” I muttered, taking my usual seat.
“Yo, Faulkner.” Evan nodded in greeting as he and three guys from the tennis team slid into seats around mine as though nothing was the least bit changed. They were carrying Burger King bags and wore matching tennis backpacks, the pro kind we’d been begging Coach to approve for years. I was so distracted by their backpacks that I failed to notice two things: that they’d all gone off campus for lunch and that Evan’s uniform sported an extra line of embroidery.
“Aren’t you going to congratulate me on making captain?” Evan reached into his bag and unwrapped a massive double burger. The smell of warm onions and clammy meat patties filled the classroom.
“Congratulations,” I said, unsurprised. Evan was the most likely choice for it, after all.
“Well, someone had to take over for your gimp ass.” Evan’s surfer baritone made the insult sound strangely friendly.
Jimmy, who was sitting behind me, held out what had to be a full-sized bucket of fries. “Want some?”
“Sure you can’t finish that yourself?” I deadpanned.
“Nah, I got enough for everyone, in case Senora Martin gets mad.”
I couldn’t help it, I laughed.
“Dude,” Evan said, clapping me on the shoulder. “You in for Chipotle tomorrow? Taco Tuesday, gotta get some tac and guac!”
“No one calls it that.” I shook my head, grinning.
It was strange, my crew acting the same as they always had, and for a moment I wondered if it was really that easy. If I could go for Mexican food with a team I no longer belonged to. If I even wanted to hang out with them, now that I’d gone from leader to liability. 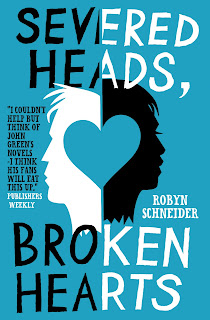 Awesome, huh? Check out my review of Severed Heads, Broken Hearts and then go out and buy it!

Thanks to Kat at S&S for asking me to be a part of the tour.