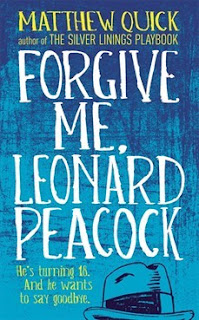 Other Titles by this Author: Silver Linings Playbook, Sorta Like a Rockstar, Boy21

How would you spend your last birthday if you knew it would be your last?

Not to his mum – who he calls Linda because it annoys her – who’s moved out and left him to fend for himself. Nor to his former best friend, whose torments have driven him to consider committing the unthinkable. But to his four friends: a Humphrey Bogart obsessed neighbour, a teenage violin virtuoso, a pastor’s daughter and a teacher.

Most of the time, Leonard believes he’s weird and sad but these friends have made him think that maybe he’s not. He wants to thank them, and say goodbye.

I have thoroughly mixed feelings about Forgive Me, Leonard Peacock.

Matthew Quick has a gorgeous writing style. The flow and sheer internality of it captured me immediately and I felt like I was inside Leonard’s head (a scary place to be, fyi). I especially loved the footnotes as I always think that captures the tangents you take in your own thoughts, though I get that they annoy lots of people. Quick used so many subtle and non-subtle techniques that made the English Lit graduate inside me dance with joy, particularly the staggered and stilted typography at moments of high emotion and intensity. Love.

Aside from the pure skill behind Forgive Me, Leonard Peacock, it’s rather depressing. Being so immersed in Leonard’s mind comes at a cost. His fixation on finding connections between his school and the people in it with the struggles of Nazi Germany and the Holocaust because of his Holocaust class; the firm belief that adulthood is miserable, and with some pretty damning proof and just how horrible his first eighteen years of life were. I felt so strongly for him, but I also wanted to back away and put the book in the freezer. Leonard’s desperation was palpable.

With the honest, almost visceral portrayal of Leonard’s frame of mind I was expecting a shocking revelation and an ending that’d take my breath away, but it was actually a little predictable. I had guessed the revelation about the former best friend of the synopsis and the ending didn’t stir any particular emotions in me, even though I know that the final letter should have made me cry. The letters, which I’ll leave a mystery for you to discover yourselves, were gorgeous and that was what I was hoping would deliver the final blow for me. Nothing. I expected some controversial twist or explosive ending Cat Clarke style. Instead I got some pretty standard.

So there you have it. I was simultaneously in love with and disappointed by Forgive Me, Leonard Quick.  I’ll definitely be reading more of Matthew Quick’s YA and The Silver Linings Playbooks, however.

Thanks to Headline for sending me a copy for review.