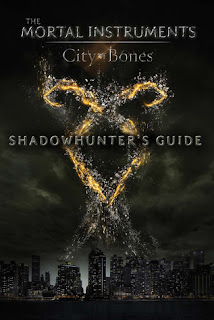 This is the ultimate guide to the dark, seductive New York City of the Shadowhunters, based on The Mortal Instruments: City of Bones feature film.

- Detailed information on the rest of the Shadowhunters, Downworlders and demons, as well as the various weaponry and runes.

- Quotes from the movie script and more!

For fans new and old, this is a must-have guide to the world of the highly anticipated movie.

Though it’s short, the Shadowhunter’s Guide packed a punch of information and excitement. Tantalising snapshots of the film made me even more excited to see the movie that I already am. Then there were quotes from the book scattered throughout and bam! Now I’m dying to re-read the entire TMI series.

A run-down of the novel was given throughout the Shadowhunter’s Guide, complete with explanations of every element of the world you need to know about and a fantastic spread about each rune and what they do. I do think there may have been a little too much detail for someone who hasn’t read the book or seen the film yet, but as I've read it many times, it didn’t really bother me!

This is a great way to pull in new fans of TMI and whet the appetites of old fans in wait of the movie. 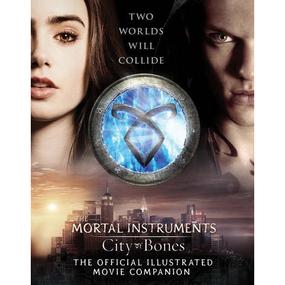 Get a behind-the-scenes peek at the making of the highly anticipated movie The Mortal Instruments: City of Bones in this definitive, official companion.

This captivating book features
- full-colour photos from the set in Toronto
- the visionary sketches from director Harold Zwart
- interviews with cast and crew
- details of how the worldwide literary sensation went from book to film
- and more!

You’ll learn how the actors embodied and connected to the characters like Clary and Jace. You’ll read about the makeup department’s extreme use of fake fingernails for the nefarious vampires. And you’ll see how important the fans of the book were in bringing this film to life.  From the casting decisions to the director’s infectious enthusiasm to the innovative use of special effects, this is an all-access pass to this summer’s hottest movie.

There is so much goss and info crammed into only 130 pages! Anything you want to know about how City of Bones made it from page to screen, look no further. With input and interviews from Cassie, Jamie, Lily, Kevin Zegers (Alec), the director, producer and so many more, The Official Illustrated Movie Companion gives you everything you could want and more.

With gorgeous images from the set, original concept art and copies of the script doodled on by the director and producer, I got beyond excited to see the finished product next week. The magic of Cassandra Clare’s world sounds like it’ll be right there on the screen; there was so much passion and engagement from everyone who had something to say in this book and I have very high hopes.

Thanks to S&S for the review copies!

The Mortal Instruments: City of Bones will be out August 21st in the UK. I’ll be there opening night, will you?