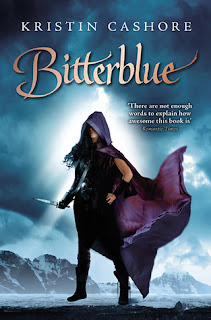 Other Titles in this Series: Graceling, Fire

Eight years have passed since Princess Bitterblue and her country were saved from the vicious King Leck. Now Bitterblue is the queen of Monsea, and her land is at peace.

But the influence of her father, and his mind-altering abilities, lives on. Her advisors believe in a forward-thinking plan: to pardon all of those who committed terrible acts during Leck’s reign; and to forget every dark event that ever happened. Monsea’s past has been shrouded in mystery, and it’s only when Bitterblue begins sneaking out of her castle – curious, disguised and alone – to walk the streets of her city, that she begins to realise the truth. Her kingdom has been under the spell of a madman, and their only chance to move forward is to revisit the past.

Graceling and Fire are two of my 2013 reading highlights so once I had Bitterblue in my hands I put it on my shelf and put it off for months. I wanted to postpone the ending of such a incredible trilogy, but I was actually a little disappointed.

I wanted as immediately sucked in to Bitterblue’s world as I was Katsa and Fire’s. At over 500 pages, it was too long. There was so much detail and politics and a fair bit that I have to admit to scan reading to get on to something more exciting. Being queen was boring for Bitterblue and a little for me as well. I found myself desperately wanting Katsa and Po to turn up at some point. Thankfully, there were a large part of Bitterblue, especially Po and I was so, so happy to see them again and they stole the show. I loved the effortless way that their love and intimacy was portrayed from someone not in the relationship; the smallest moments, expressions and subtleties. Perfect.

As well as being reunited with Katsa and Po and a few other minor characters from Graceling, I was really hoping for a hint from some of the characters from Fire, though I knew it was a longshot. Towards the end, I started to feel the connection through the trilogy as things were uncovered and Dell was revealed as existing. It was a really nice to see all three books come together and also formed a support for the whole of Bitterblue’s story to sit on.

Bitterblue is a fantastic heroine from start to finish. She really grew over the course of the novel; she became a queen. The way that she spoke, acted and felt veered wildly for the most part of the novel. she switched from the child thrown into power that she was to strong and self-assured, it was so authentic and real that I became so thoroughly invested in her quest to better herself and her kingdom that I was able to push through the drier sections of Bitterblue. To be forced into a position so difficult and dangerous so young seems impossible so I am glad that she also has a really snap and sass about her that gave way to some excellent banter, especially between her and Saf, who I kind of fell in love with, by the way. Though never as much as Po who I only continued to fall in love with throughout Bitterblue.

This book in no way compared to Graceling and Fire, but it was lovely to be back in Kristin Cashore’s stunning world and to be reunited with Katsa and Po. This is a trilogy well-worth reading.

Posted by So Many Books, So Little Time at 09:52
Email ThisBlogThis!Share to TwitterShare to FacebookShare to Pinterest