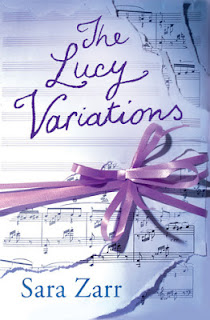 Other titles by this Author: Story of a Girl, Sweethearts, Once Was Lost, How to Save a Life

Lucy Beck-Moreau once had a promising future as a concert pianist. The right people knew her name, her performances were booked months in advance, and her future seemed certain.

That was all before she turned fourteen.

Now, at sixteen, it’s over. A death, and a betrayal, have led her to walk away, leaving her talented ten-year-old brother, Gus, to shoulder the full weight of the Beck-Moreau family’s expectations. Then Gus gets a new piano teacher who is young, handsome, and interested in helping Lucy rekindle her love of the piano – on her own terms. But when you’re used to performing for sold-out audiences and world-famous critics, can you ever learn to play just for yourself?

The Lucy Variations is the story of one girl’s struggles to retain her love of music and herself; because life isn’t a performance and everyone deserves the chance to make a few mistakes along the way.

Sara Zarr writes beautiful, thought-provoking and deeply involving contemporary YA novels and The Lucy Variations is no exception.

Though the novel is about music, love, friendship and learning about what you want and how to get it, I think that The Lucy Variations was primarily about family. And what a family the Beck-Moreau’s are. The relationship between Lucy and her family members were fascinating as well as being sometimes heart-warming and sometimes anger-inducing for me a reader. My favourite by far is Lucy and her little brother Gus. They have a strong bond built by years of sticking together against their mother and grandfather’s bossiness and demands and the protective way Lucy regarded Gus, when he was mad at her, was so nice to read and very realistic. Sibling relationships in YA are usually fraught with tension, arguments and hatred, and though the former two made an appearance - why wouldn’t they? They’re brother and sister! - nothing could stop them from loving each other. It was refreshing to see a sibling relationship that was healthy and real.

Not having a musical bone in my body, music to my disappointment, I hadn’t even thought about the pressure and ramifications of having a classical music career, let alone having one as a child and teenager. At first I was immensely angry at Lucy’s mum and grandfather for treating her the way they did after she quit, but I slowly began to see where they were coming from, even if I didn’t agree with their methods. They did it out of misguided love, and yes, a little jealousy and frustration that I didn’t really start to consider until Wil came into the picture.

Will, Will, Will. I kind of fell in love with him. I mean, he plays the piano – I’m sold. He was sweet, caring and understood Lucy’s plight. He even helped her to overcome what was almost a fear of playing again; of letting herself love music again. Then I started to wonder about him. But then he’d explain himself to Lucy and I’d fall back in love, completely oblivious. I won’t tell you whether I should or shouldn’t have believed him, you’ll just have to read and find out for yourself!

In the background of all of this were Lucy and her relationship with Rayna. Again with the breaking YA norms, Sara Zarr portrayed such a multi-dimensional relationship that is incredibly realistic. It wasn’t a black-and-white, they didn’t either love each other unconditionally and never fight or they secretly hate each other kind of thing. They had history, unresolved feelings, secrets and other lives tucked away. They’re people with issues and lives and minds of their own and I loved them. Even though their friendship wasn’t always perfect and they argued and disagreed on occasion, they were there for each other when they needed it. They’re the type of friends you hope to find in real life.

The Lucy Variations is a another stunning novel from Sara Zarr. A sensitive and gripping story of love, music and family. I can’t wait for the next one.

I purchased this copy from Waterstones Broadmead.