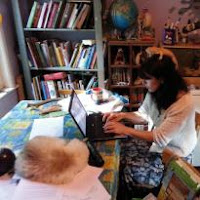 Debut author Veronica Cossanteli who fantastic novel, The Extincts, was prublished by Chicken House at the beginning of May has stopped by the answer a few question>

1. If you could choose one extinct creature to bring back to life, which would you choose?
Tough question! I’m tempted to say a mammoth – I have a huge respect for the wisdom, and who wouldn’t love a woolly one? – but with tusks like that, I fear it wouldn’t stand a chance against ivory-poachers. The end of the dodo was a terrible shame. Like so many specifies, they were doing fine until humans got in the way – we have a lot to answer for! A glypton, something a bit like an armadillo crossed with a VW Beetle, would be rather splendid and very good at keeping the grass down. But I think I’ll settle for psittacosaurus, a charming little herbivorous dinosaur with a beak like a parrot – somewhere in between TRex and budgerigar. 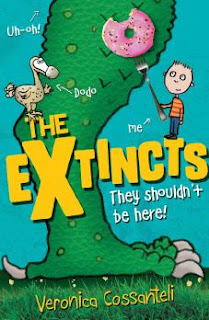 2. Who would you rather face in a fight: Mortifer the basilisk or Diamond Pye?
Mortifer – although I prefer to think that, given a mirror and a chicken korma, I might persuade him to make friends. Worst case scenario – either I get turned into stone, which is reasonably quick end (and there’s always the chance of being de-petrified in the future) OR I get eaten, in which case  at least I’ve served a useful purpose. Better than falling victim to Diamond’s poisoned chopsticks...

3. Will there be any more adventures at Wormestall Farm?
I very much hope so. I’ve been happy there, and don’t want to leave. Plenty of ideas, and threads to tie up...

And a few quick ones!

4. Favourite (living) animal?
Another tough one. I’ve always liked gorillas. I also have a soft spot for rhinoceroses – despite the fact that one of them killed my great aunt. (She was pointing a gun at it, at the time, so in my view she got what she deserved...) Both species way well soon belong at Wormestall, as humans will have rendered them extinct in the wild. But it’s the cat, always, that takes the top spot. I love them for their grace, their ESP and their infinite capacity for doing nothing. I love them slightly less for their habit of sicking up semi-digested biscuits on the end of my bed, and leaving dead mice in my shoes...

5. Current obsession?
Flea circuses. Expect a book with a flea circus in it. There are still fake ones about – the real ones died out because of lack of performers. Cat and dog fleas are not big enough, and the human flea is almost extinct. Come to think of it, maybe that the one thing to bring back from the dead: Pulex Irritans – the human flea.

6. What are you reading at the moment?
Varjak Paw by SF Said, lent to me by a Year 6 girl at school. I’m also dipping in and out of Philip Pullman’s Fairytales and Sagas and Myths of the Northmen translated by Jesse Byock. Very, very bloodthirsty. I’m going to need some  humour soon. Cue CJ Skuse, and Dead Romantic...

A massive thank you to Tina at Chicken House for putting me in touch with Veronica and to Veronica for agreeing to answer my questions. The Extincts is unique, funny and just brilliant – I highly recommend it!