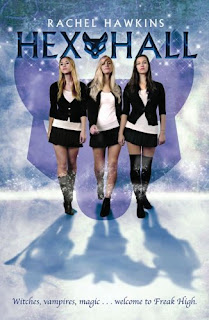 Hex Hall - Rachel Hawkins
Pages: 323
Publisher: Simon and Schuster
Release Date: 1st April 2010
When sixteen-year-old Sophie Mercer discovers she’s witch, she imagines life will be full of magic, fun and…well…broomsticks! But her first attempt at a love spell goes disastrously wrong and, as punishment, Sophie is shipped off to Hectate “Hex” Hall, a reform school for witches, shape shifters and faeries.
By the end of her first day among her fellow freak-teens, Sophie has quite a scorecard: three powerful enemies who look like supermodels, a futile crush on a gorgeous warlock, a creepy tag-along ghost, and a new roommate who happens to be the most hated person on campus and the only vampire.
Worse, Sophie soon learns that a mysterious predator has been attacking students and her only friend is the number-one suspect…
Hex Hall is a truly fantastic novel that I loved every page of. I am so glad it’s the first in a series!
The variety of magical creatures in Hex Hall make this a novel to suit the tastes of every fan of the supernatural. Hectate Hall is home to witches, warlocks, spirits, werewolves, shifters, fairies and even a few vampires who live alongside each other fairly well. And my favourite creature is usually the main character or the gut, and although I really liked Sophie’s witchiness and Archer’s warlock ness, I just couldn’t make my mind up. Persecuted vampires or whimsical fairies? Crazy powerful witches or salivating werewolves? What a choice!
As well as books about mythical creatures, for some reason, I love those that are set in isolated boarding schools. I have no idea why, but it seems sort of romantic. But Hectate “Hex” Hall is far from the usual boarding school depictions. It’s not a sprawling Gothic castle or mansion and it’s rooms aren’t filled with imposing pieces of furniture and historic relics. Hex Hall is miss-match and charmingly higgledy-piggledy. It seems so much more realistic for a place hiding members of a world that needs to stay hidden.
Sophie’s world is a very cool one. I love Rachel Hawkins’ mythology on the origins of the mythical creatures collectively known as the Prodigium. Background like this is very rarely given and it gave Hex Hall such a connection to history and reality. This sense of history and inheritance is enhanced as we learn more about Sophie the dark secrets of her family’s past. It’s such a compelling story and in the last hundred pages of so it was just shock after shock. I didn’t want it to end!
With Hex Hall Rachel Hawkins has written an incredibly funny, magical and engaging story that’ll be a favourite with lots of people and I can’t wait to read the nest instalment of Sophie’s story.
For my 2010 Debut Author Challenge, 2010 100+ Reading Challenge
Sophie
Posted by So Many Books, So Little Time at 09:00
Email ThisBlogThis!Share to TwitterShare to FacebookShare to Pinterest